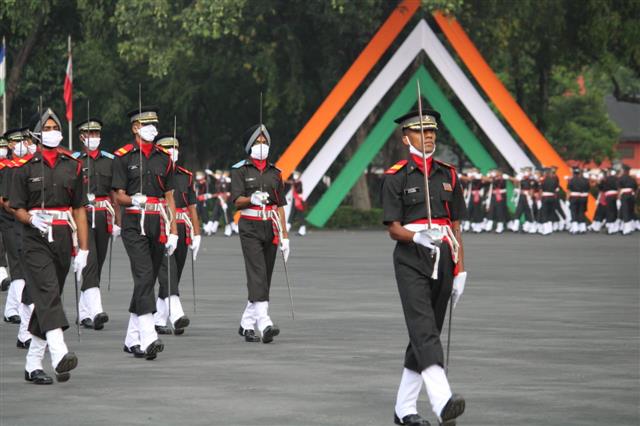 The passing out parade for the Spring Term – 2021 at the Indian Military Academy (IMA), Dehradun, scheduled to be held on June 12, will witness 425 gentlemen cadets being pipped as commissioned officers.

This includes 84 foreign trainees from nine countries, making it one of the largest batches of foreign cadets to take the final step through the academy’s portals. In June last year, 90 foreign cadets had passed out.

With current strength of 222 foreign trainees, almost every fourth cadet at the IMA is from a foreign Army reflecting the stellar international standing of the academy and its reputed training regime.

The academy has been pursuing a visionary transformation of its infrastructure and training methodology towards preparing the young military leaders for the complexities of the future battlefields.

The Covid pandemic posed serious challenges for the IMA but the extremely pro-active measures and strict enforcement of requisite protocols ensured a largely Covid-free environment at the academy, which progressed uninterrupted training over last 16-18 months to fulfil its mandate of training future combat leaders.

Since its raising in 1932, a total of 60,384 Indian cadets and 2,572 cadets from 34 friendly foreign countries have been trained and commissioned as officers in their respective militaries from the IMA.

Lieutenant General RP Singh, General Officer Commanding-in-Chief, Western Command, Chandimandir, will be the reviewing officer of the passing out parade that will be held in the backdrop of the famous Chetwode Hall.

Various events associated with the passing out parade will commence on June 11 with a solemn wreath laying ceremony at the IMA war memorial to pay homage to 889 alumni who have made the supreme sacrifice in the line of duty.

Due to the prevailing Covid situation, parents and family members of the passing out cadets will not be able to attend the event and the pipping of cadets, traditionally done by parents, will be done by the Instructional staff posted at IMA and the parade will be live streamed on social media.

The State Election Commission has filed an application before the Supreme Court of India seeking that the stay on the implementation of the order...
Read more
Entertainment