BJP works to create divide, Congress to connect with all: Rahul Gandhi 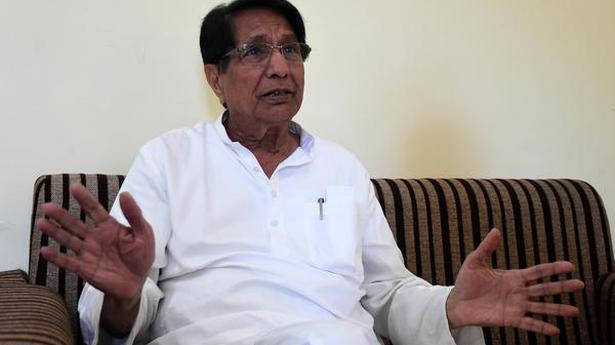 Ajit Singh, a computer engineer by training, was one of the first IITians to enter politics

Mr. Ajit Singh, 82, a computer engineer by training, was one of the first IITians to enter politics, and became a Rajya Sabha member after his father, former Prime Minister Chaudhary Charan Singh, fell ill.

In his chequered political career, Mr. Ajit Singh’s political party and his alignments went through several avatars — from heading the Lok Dal (A) and the Janata Party in 1987 and 1988, before being general secretary of the Janata Dal in 1989 with V.P. Singh, he founded the RLD in 1998 and was Minister in the Vajpayee government from 2001-2003 and the Congress-led second United Progressive Alliance government till 2014 — but all political formations he headed or was part of saw him drawing strength from the rural hinterland of western Uttar Pradesh.

The frequent changes in his political alliances did not add much to his heft but kept him relevant in the coalition era of the 1990s and early 2000s. He was elected to the Lok Sabha from Baghpat from 1989 to 2009, losing the seat only in the bypoll of 1998 and the general elections of 2014.

The strong support base of Jats and Muslims in western Uttar Pradesh, the State that sends the largest contingent of Lok Sabha members to Parliament, made him an essential part of many of the coalition governments in the 1990s and 2000s. The communal riots in Muzzaffarnagar in 2013, however, saw this support base splinter and his party suffered a major defeat in 2014 without a single seat. In the last year or so his party vigorously campaigned against the three controversial farm laws, an issue which is of concern to agrarian communities over and above communal considerations.

Former colleagues of Mr. Ajit Singh recalled his personal warmth towards them, whatever his political alignment happened to be at a particular time. One of the first calls that former Chief Minister of Karnataka Siddaramaiah made to a Union Minister in Delhi after becoming Chief Minister was to Mr. Ajit Singh, a gesture underlining the fact that it was on a Lok Dal ticket in the 1970s that the former had fought his first election.

Bashishstha Narayan Singh, Rajya Sabha MP and former Bihar unit president of the Janata Dal, had been a close associate of both Chaudhary Charan Singh and Mr. Ajit Singh. “What stood out with Ajit Singhji was his personal warmth and courtesy to colleagues and former colleagues. I have visited his home and his attitude would be the same warm one, whether you were political fellow travellers at that point or not.”

Prime Minister Narendra Modi also paid tribute to Mr. Ajit Singh stating that the latter was always at the forefront of fighting for the interests of farmers.

Doctors educate people on liver diseases at ‘Punarjanma’ in Mysuru

Simi Garewal recently shared a clip of the time when the Roshan family had made an appearance on her popular talk show Rendezvous with...
Read more
National

The mosque is located close to the iconic Kashi Vishwanath temple and the local court is hearing a plea by a group of women...
Read more
Trending

BJP works to create divide, Congress to connect with all: Rahul...

Doctors educate people on liver diseases at ‘Punarjanma’ in Mysuru

The mosque is located close to the iconic Kashi Vishwanath temple and the local court is hearing a plea by a group of women...
Read more