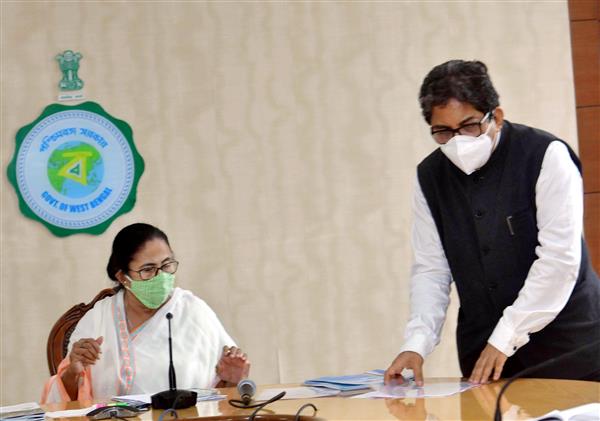 West Bengal Chief Minister Mamata   Banerjee on Wednesday claimed that Alapan Bandyopadhyay is a closed chapter now, but asserted that her administration will stand by the former chief secretary of the state on the row over his not joining the central government.

Bandopadhyay was set to retire on May 31, but the state had recently sought and received permission for extension of his tenure by three months as he played a crucial role in the fight against the Covid-19 pandemic.

He was, however, handed over a transfer directive by the Centre, shortly after a row broke out over Prime Minister Narendra Modi’s post-cyclone review meeting, which the CM and the state chief secretary did not attend.

The bureaucrat, instead of reporting to Delhi, chose to retire amid the Centre-state tussle. He was subsequently appointed as the CM’s chief adviser.

The Union Home Ministry has served a show-cause notice on Bandyopadhyay under a stringent provision of the Disaster Management Act that entails imprisonment up to two years, amid a tug-of-war between the Centre and the Mamata Banerjee government over him.

Bandyopadhyay has already started working as the chief adviser and was present at Wednesday’s meeting of the state Irrigation department presided over by Banerjee. PTI

Acid attacker shot at while allegedly trying to flee

An acid attacker , who was arrested from Tiruvannamalai on Friday afternoon was shot in the leg and apprehended when he allegedly tried to...
Read more
National

A massive fire in Delhi’s Mundka has claimed more than 25 lives with casualty numbers expected to go up. According to reports, it was...
Read more
National

Toddy is banned in Tamil Nadu, but palm jaggery sustains the...