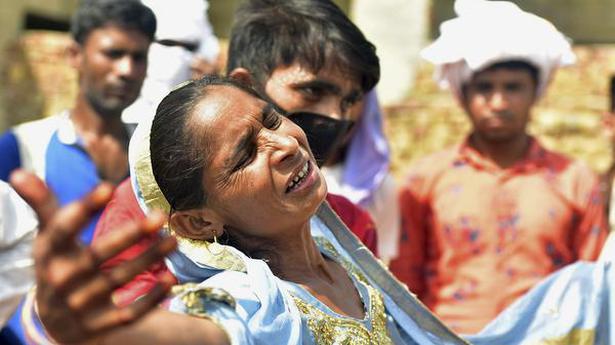 After at least 36 people died due to consumption of spurious liquor in Aligarh, the Congress on June 1 demanded a high-level probe by a sitting high court judge.

Demanding a high-level judicial inquiry, Congress leader Vivek Bansal said it was necessary to bring the names involved in the entire racket to the fore.

“By accepting that 71 post-mortem were conducted till Monday afternoon, the authorities were resorting to technicalities to scale down the actual death toll,” he said in Aligarh.

He also said that reports from several villages indicate that a large number of victims have been cremated without a post-mortem.

“Only a high-level judicial probe could establish their families’ claims for ex-gratia relief,” the Congress leader added.

Mr. Bansal, who is a former MLA from Aligarh, said opening of liquor vends during lockdown as if it was an essential service reflected the myopic vision of the State government and its flawed priorities.

The gravity of the situation and the outreach of the liquor mafia can be gauged from the fact that even a ruling party MLA has alleged that he himself had repeatedly drawn the attention of the concerned authorities that illicit liquor trade was being carried out even by street-corner vendors, he said.

The death toll in the Aligarh hooch tragedy rose to 36 on June 1 with authorities saying it may rise further.

Thirty people have been arrested since May 28 in this matter, Senior Superintendent of Police Kalanidhi Naithani had said.

The Uttar Pradesh government has cracked the whip on U.P. Excise Commissioner P. Guruprasad, and suspended two other senior officials.