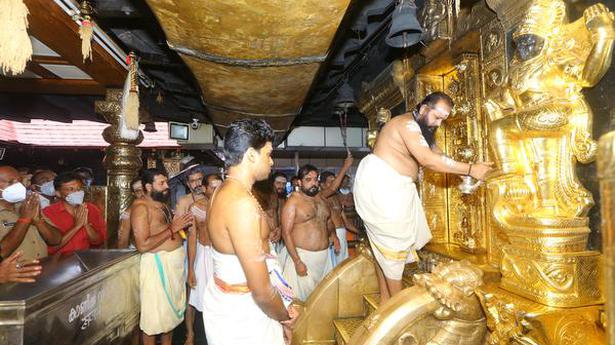 The Ayyappa temple at Sabarimala opened for devotees in connection with the five-day monthly rituals at 5 p.m. on Saturday.

Under the guidance of Tantri Kandararu Mahesh Mohanararu, Melsanthi V.K. Jayaraj Potti opened the sanctum sanctorum of the temple at 5 p.m. This was followed by the opening of the various upadevatha temples and the lighting of the `aazhi’ near the 18 holy steps.

As there were no special rituals on the opening day, the temple was closed for the day after the `Harivarasanam’ rendition by 7.30 p.m. It will reopen at 5 a.m. on Sunday for ‘nirmalya darsan.’ After the Ushapuja at 7.30 a.m., the selection of new melsanthis through draw of lots will be held at 8 a.m.

The new melsanthis, to be appointed for a year, will take charge on the first day of the Malayalam month of Vrischikam, when the annual pilgrim season begins.

In view of the heavy rain, District Collector Divya S. Iyer has banned the entry of pilgrims to the holly hillock on October 17 and 18. A meeting convened by Chief Minister Pinarayi Vijayan to assess the rain situation later extended the ban on pilgrims to October 19 as well.

After the Thulamasa rituals, the temple will reopen for the Chithira Aattathirunal festival on November 2.