Bandyopadhyay responds to Centre, says he didn’t violate any rules 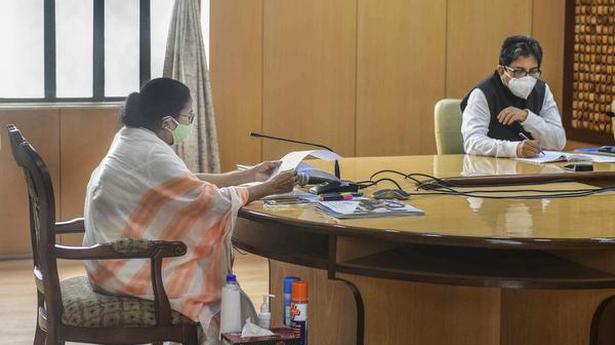 The former Chief Secretary says he was acting as per the instructions of West Bengal Chief Minister Mamata Banerjee.

Former West Bengal Chief Secretary Alapan Bandyopadhyay on Thursday responded to the showcause notice issued by the Centre to him. Mr Bandyophyay, who is working as the Chief Adviser to Chief Minister Mamata Banerjee, was served a notice by the Centre under the Disaster Management Act on May 31.

According to sources at West Bengal State Secretarait, Mr. Bandyopadhyay, in his reply, has said that he has not violated any provisions of the Act and acted as per the instructions of Chief Minister Mamata Banerjee. The former Chief Secretary also pointed out that he had taken the leave of Prime Minister Narendra Modi before proceeding with Chief Minister Mamata Banerjee to visit the cyclone-affected areas on May 28.

A political row had erupted on May 28 after Chief Minister Mamata Banerjee and Chief Secretary Alapan Bandyopadhyay were not present at a review meeting on cyclone Yaas. Chief Minister Mamata Banerjee had maintained that she along with Mr Bandyopadhyay had met the Prime Minister at the venue. The same evening Mr Bandyopadhyay was asked to report to Delhi. Following the developments, the Chief Secretary, who had got a three-month extension, opted to retire on May 31 and the Centre issued a showcause notice to him.

According to officials at the State Secretarait, along with Mr Bandyopadhyay, the State’s new Chief Secretary Hari Krishna Dwivedi has also responded to the Centre on the letter dated May 31.