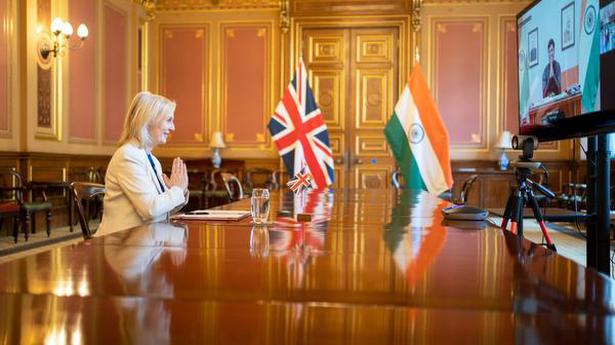 The ETP is said to create immediate opportunities for British businesses in India across industries including food and drink, life sciences and the service sector

“Today I signed the U.K.-India Enhanced Trade Partnership with my friend @PiyushGoyal. Together, we have committed to – negotiating a comprehensive free trade deal, starting this autumn, more than doubling trade by 2030 and reducing barriers to trade in key industries,” Ms. Truss said in a tweet on Tuesday.

Prime Minister Narendra Modi and his British counterpart Boris Johnson on Tuesday launched the ‘Enhanced Trade Partnership’ (ETP) to unleash the trade potential between the 5th and 6th largest economies of the world and by setting an ambitious target of more than doubling bilateral trade by 2030, the Ministry of External Affairs said in a press release on Tuesday.

As part of the ETP, India and the U.K. agreed on a roadmap to negotiate a comprehensive and balanced FTA, including consideration of an Interim Trade Agreement for delivering early gains. The enhanced trade partnership between India and U.K. will generate several thousands of direct and indirect jobs in both the countries, it said.

The ETP is said to create immediate opportunities for British businesses in India across industries including food and drink, life sciences and the service sector. Non-tariff barriers on fruit and medical devices will be lowered, allowing British businesses to export more of their products to India and boosting U.K. growth and jobs. It also commits both sides to addressing immediate market access barriers as well as continuing to seek further opportunities on the road to an FTA.

The trade barriers addressed by the ETP include lifting restrictions to enable fruit producers across the U.K. to export British apples, pears and quince to India for the first time and improved access for medical devices through the acceptance of U.K. Certificates of Free Sale in India, removing the requirement for additional accreditation of U.K. medical devices when exporting to the Indian market before they can be sold.

Russia pulls back from Kharkiv, fighting continues in the east: Ukraine military

Russian troops are withdrawing from around Ukraine’s second-largest city after bombarding it for weeks, the Ukrainian military said on Saturday, as Kyiv and Moscow’s...
Read more