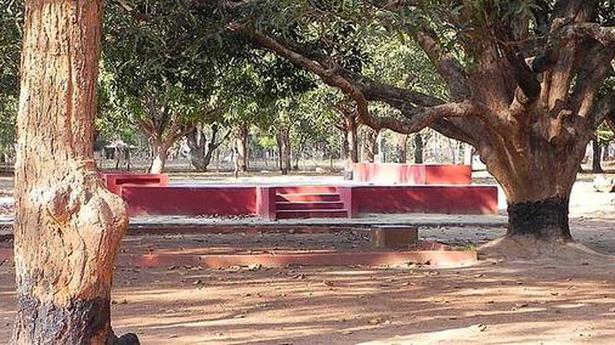 Sangit Bhavana, one of the oldest wings of the Rabindranath Tagore-founded Visva-Bharati, has barred its faculty members from participating in any event outside the university without permission.

Teachers are not only angry about the order, calling it “caging of their freedom”, but also the “casual manner” it was served on them. The notice, printed on a plain piece of paper and signed by the principal of Sangit Bhavana on Sunday, was circulated on the WhatsApp group of the faculty members, according to a teacher.

It warned faculty members of “stern action” if they accepted “any request/proposal/assignment, etc. from any outside personnel/institution/organisation to perform/represent any online/offline programme course, etc. without approval of the competent authority”.

This is the latest in the string of unpopular decisions taken by the Visva-Bharati ever since Prof. Bidyut Chakrabarty took over as the Vice-Chancellor in November 2018. A gag order is already in place prohibiting any employee from speaking to the media.

“They have already constructed high walls in Visva-Bharati in the name of protecting Tagore’s institution, now they are extending that wall to cut us off from the rest of the world,” a music teacher told The Hindu, requesting not to be named. “This is the time of a pandemic; this is also the time of our vacation. Why should it matter to the authorities what we do with our free time in our personal capacity?”

Sangit Bhavana has nearly 60 faculty members; those specialising in Rabindra Sangit (Tagore’s songs) are usually sought after during cultural events celebrating Tagore. “During the pandemic, with so many people dying, many have found Tagore’s songs to be a balm and invited us to perform online, something that has obviously not gone down well with the authorities,” said the teacher.

A senior academician who cherishes his past association with the university said: “It is fair to say Visva-Bharati is known the world over not in other disciplines but for Kala Bhavana and Sangit Bhavana. Tagore himself had taken teachers and students to faraway places for such performances. So selectively targeting Sangit Bhavana smacks of an effort to obliterate the Tagorean tradition itself.”

The academician added: “It seems the ‘competent authority’ is to give approval. I would imagine the authority to be occupied with innumerable academic and administrative matters. So, is a teacher expected to be in the hot pursuit of such an approval to come, even for an event, say, in nearby Burdwan University? What a waste of precious time would that be?”

The move is expected to bring significant reduction in pay and pensions and frees up funds for modernisation of...
Read more
Entertainment

Kareena Kapoor Khan and Vijay Varma were spotted chilling on the Darjeeling sets of Devotion of Suspect X. The pictures have surfaced online and...
Read more
World

Filmmaker Anees Bazmee returns with yet another comedy with Bhool Bhulaiyaa 2, but this time, his comedy — starring Kartik Aaryan, Kiara Advani and...
Read more
- Advertisement -

For over 80 Sri Lankan Tamils, including children and infants, who took boats and landed in Tamil Nadu in recent months, the risky journey...
Read more
- Advertisement -