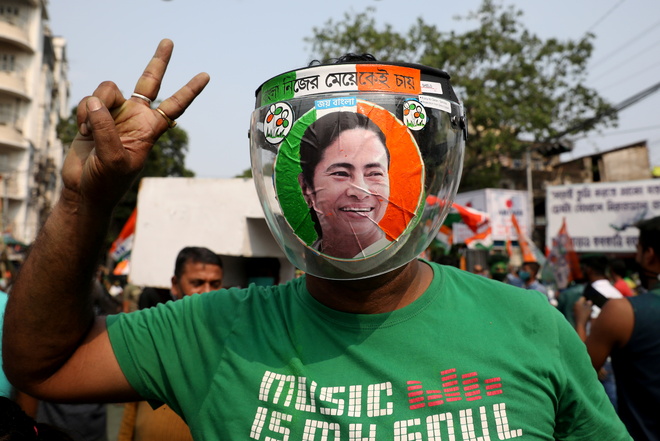 The consolidation of Muslim and anti-BJP secular votes in her favour seems to have played the trick for Chief Minister Mamata Banerjee, whose party Trinamool Congress is all set for third consecutive term in West Bengal after registering an emphatic victory in the Assembly elections.

“The districts with strong Muslim population such as Murshidabad and Malda were traditionally Congress strongholds. But this time, they voted for the TMC,” said Biswanath Chakraborty, political analyst. In Murshidabad, the TMC won 17 of the 20 seats compared to one in the 2016 elections. In Malda, it won six of the 12 seats compared to none last time. The TMC has always had strong following among Muslims in south Bengal, including Kolkata. The consolidation of Muslim votes behind Mamata Banerjee ought to have set off a counter-reaction among Hindu voters, thus benefitting the BJP, but that didn’t happen.

“A large section of the Hindu voters who simply wanted to keep the BJP at bay voted for the TMC because they thought their votes would be wasted if cast for any other secular outfit. Campaigns such as ‘No vote to the BJP’, launched by civil society groups and Left-wing student groups, seem to have helped Mamata,” said Suhit Sen, historian and alumnus of the School of Oriental and African Studies, London.

Prime Minister Narendra Modi addressed 16 election rallies in West Bengal after the poll dates were announced. Modi and Home Minister Amit Shah, who participated in 62 events across 28 days, earned the sobriquet of “daily passengers” because of their frequent trips from Delhi to Bengal.

“The injury sustained by Mamata at Nandigram may have aroused sympathy among voters…. or may be her poll strategy of branding the BJP as a party of outsiders worked,” opined BJP general secretary and the party’s West Bengal in-charge, Kailash Vijayvargiya, when asked about the results.

The TMC won because of Mamata Banerjee. It seems people have chosen Didi. We will introspect what went wrong. Kailash Vijayvargiya, BJP leader

Mamata Banerjee led the fight for Bengal’s self-respect single-handedly and all credit goes to the Bengal tigress for the win. She defeated all forces. Uddhav Thackeray, Maha CM

Heartiest congratulations to Didi. The BJP & a throughly partisan EC threw everything, including the kitchen sink, at you & you prevailed. Omar Abdullah, NC leader

The voters of Bengal (especially Nandigram) have shown where their hearts lie. The BJP has met its match in Bengal, and lost. Shashi Tharoor, Congress leader

The Bharatiya Janata Party has questioned the silence of Chief Minister K. Chandrasekhar Rao in the recent murder of...
Read more
National

Most of the leaders who spoke at the Guru Vandana event organised by the Sakal Maratha Samaj in Belagavi on Sunday, demanded that the...
Read more
National

NEW DELHI: The National Green Tribunal directed the governments of Uttar Pradesh and Bihar to inform them about the number of human corpses found...
Read more
National

President Kovind accompanied by his wife Savita Kovind arrived at Kingston on the first leg of his two-nation tour that will also take him...
Read more
- Advertisement -