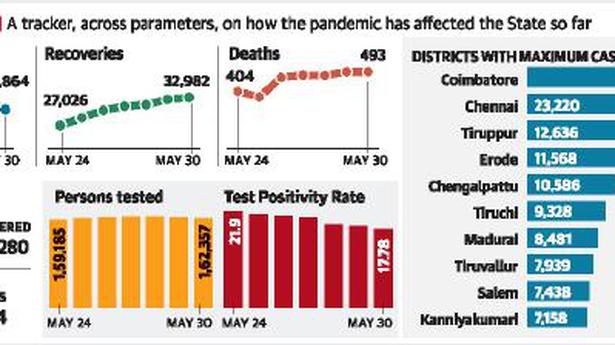 After 32,982 people were discharged after treatment, the total number of those discharged has gone up to 17,39,280.

Coimbatore district, which tops the State in fresh infections, reported a marginal drop in the number, with 3,537 people testing positive. As many as 3,275 people were discharged and 47 persons died of the infection. At present, 39,047 people are undergoing treatment.

Chennai reported 2,689 fresh cases and 5,795 people were discharged, according to the daily bulletin from the Directorate of Public Health.

In Chengalpattu, 1,194 fresh cases were identified and 37 persons died. Kancheepuram reported 664 fresh infections and 20 deaths. In Tiruvallur, 887 people were found infected and 18 persons died. No deaths were recorded in Perambalur, but they were high in Erode (22), Vellore (21), Kancheepuram (20) and Madurai (19).

The Chennai woman was admitted to a private hospital with complaints of fever, cough for three days and breathing difficulty on May 18.

She tested positive on May 26. She died of COVID-19 pneumonia.

The government recently approved a private laboratory in Kanniyakumari for testing. The State now has 269 testing centres: 69 in the government sector and 200 in the private sector.