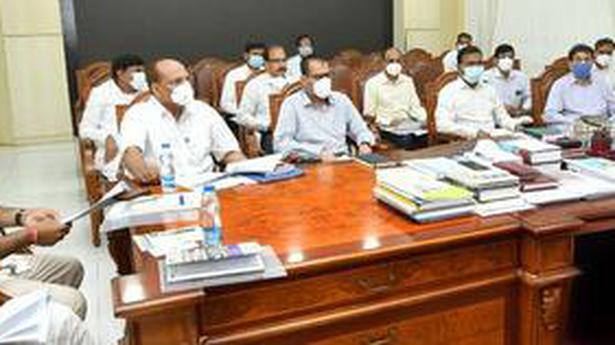 Govt. to set up 250-bed super specialty hospitals in Warangal and Adilabad

Chief Minister K. Chandrasekhar Rao has sanctioned appointment of about 50,000 MBBS degree holders for COVID duties on ad hoc basis to bring down pressure on health staff in the midst of a raging second wave of the pandemic.

Doctors with MBBS degree, nurses, lab technicians, pharmacists and other para medical staff must be appointed immediately for two to three months, he told an official meeting that was held to review the pandemic situation on Sunday.

A release said Mr. Rao ordered respectable pay to all those who are to be appointed as they would be rendering valuable service to the State. They should be given weightage during appointment in regular government jobs in future.

Those interested in joining the service could apply online by logging in to ‘https://odls.telangana.gov.in/medical recruitment/Home.aspx’.

The release added that Mr. Rao decided to start super specialty hospitals in Warangal and Adilabad immediately, and appoint medical and health staff there.

A 250-bed super speciality hospital of MGM Hospital at Warangal could start from the nearby Kakatiya Medical College campus and another such hospital of similar bed strength could commence at RIMS, Adilabad, immediately.

Immediate action should be initiated for the recruitment of those 729 staff.

During the review, Mr. Rao enquired about the availability of oxygen, beds, Remdesivir injections and other facilities at hospitals. He was told by officials that there was no shortage of oxygen supply. There were 7,393 beds available in government hospitals, along with another 2,470 beds fitted with oxygen lines and 600 beds with ventilators.

Mr. Rao spoke to Union Health Minister Harsh Vardhan to brief him about the steps taken by the State government to contain COVID-19. He suggested that the rapid spreaders of virus should be identified and administered vaccine first. He wanted guidelines to be relaxed to include in a special category for vaccination cab drivers, auto drivers, bus conductors, cooking gas cylinder suppliers and workers who have to cover many places throughout the day for their daily work. The Union Minister promised to discuss the suggestion with Prime Minister Narendra Modi.