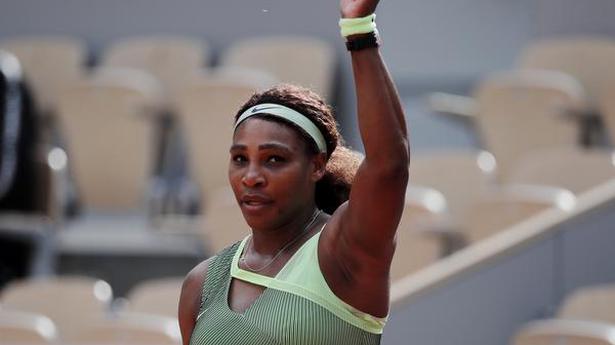 Serena Williams sent out a warning to the rest of the depleted women’s draw on Friday with a dominant straight-sets win over Danielle Collins to reach the French Open last 16 for the first time since 2018.

Serena, at eight, is now the highest seed left in her half of the draw, with all of the world’s top four absent from the second week.

The Belarusian made a whopping 39 unforced errors against 41 winners and served eight double faults to six aces as her disappointing run at the Grand Slam stage continued.

Serena will next face Kazakh 21st seed Elena Rybakina, with a potential quarter-final against old rival Victoria Azarenka up for grabs.

The American had a slight scare in the second set when she fell 1-4 behind against 2020 quarter-finalist Collins, but won the next five games to secure victory.

German sixth seed Alexander Zverev eased into the last 16 for the fourth successive year with a straight-sets win over Serbia’s Laslo Djere.

The comfortable nature of victory was welcome for Zverev, who had fought back from two sets down to beat unheralded compatriot Oscar Otte in round one before edging three tight sets against Russian qualifier Roman Safiullin.

“This is the main goal of my tennis career, to win Grand Slams. I feel like the last year I’m on the right track again,” said Zverev.

He will next face former World No.4 Kei Nishikori, whose third-round opponent Henri Laaksonen retired injured following the opening set.

Rain briefly hit Roland Garros on Friday, but Zverev and Djere were able to continue under the Chatrier roof.

The World No. 6 struck 31 winners and four aces as he dragged himself out of difficulty in the second set, saving three set points at 3-5 down on Djere’s serve before winning 10 of the next 12 games.

Kylian Mbappe, who scored 25 league goals for PSG this year, was named the best player of the 2021 Ligue 1 season, but refused...
Read more

It was a Sunday dawn marinated in grief for the cricketing world and the news from Down Under was grim. Former Australian all-rounder Andrew...
Read more
- Advertisement -