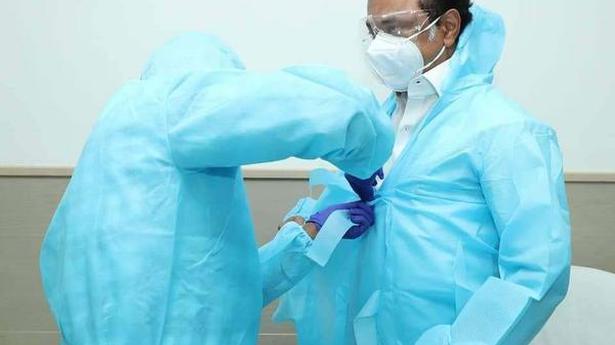 Tamil Nadu Chief Minister M.K. Stalin said on Sunday that his government was not ignoring Coimbatore with regard to COVID-19 management. The government treated all districts equally, he said, countering the charge that the western district was being overlooked for political reasons.

“The allegation is politically motivated. Those levelling the allegation should look at [COVID-19] facilities we have created after assuming office,” he told journalists after reviewing the measures taken to contain the spread of the pandemic in the western districts.

Mr. Stalin, who earlier visited a COVID-19 ward at a city hospital dressed in a PPE suit, pointed out that the second highest vaccinated district after Chennai was Coimbatore. “As many as 5.85 lakh people have been vaccinated in Coimbatore. Of them, 1.51 lakh were vaccinated after the DMK returned to power on May 7,” he said on a day when the hashtag, #GoBackStalin, trended on Twitter, before being overtaken by #WeStand WithStalin.

He recalled his statement that the DMK government would work in such a way that people who voted for the party would be happy and those who did not vote would regret it, appreciating its work. To drive home his point, he said this was his second visit to the district. He had held a video-conference with the Collector, deputed Minister for Medical and Family Welfare Ma. Subramanian and designated a senior officer as the nodal officer to oversee the implementation of the COVID-19 control measures. If need be, he would make another visit, he said.

In response to a question on the State’s move to take on lease the Integrated Vaccine Complex in Chengalpattu, Mr. Stalin said he was awaiting a response from the Centre.