Govt says all steps on for supply of Remdesivir, Tocilizumab 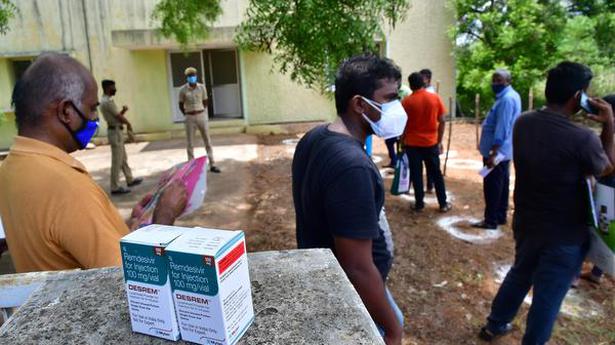 The Union government informed the Supreme Court that the Ministry of Health and Family Welfare and the Department of Pharmaceuticals (DoP) have jointly undertaken the allocation of available supplies of COVID-19 drugs Remdesivir and Tocilizumab across the States and Union Territories in view of a surge in demand for them.

The Centre said the Health Ministry, with the support of the DoP and Ministry of External Affairs was “making all efforts to enhance availability of Remdesivir through ramping up of production and sourcing through imports”.

However, there were constraints on the availability of raw materials and other essential inputs for Remdesivir. Mere addition of production capacity may not lead to the desired outcomes of enhanced supplies. “It is difficult to predict the trend of the pandemic and, therefore, difficult to forecast the demand for Remdesivir with a reasonable degree of certainty. Therefore, it is communicated that the matter of sending the proposal for invocation of the provisions of Section 100 (for government use) of the Patents Act, 1970, is being processed,” the government stated.

Also read: News Analysis | SC has only acted on Centre’s suggestions and in consultation with it on COVID-19 crisis

In the case of Tocilizumab, as the country was entirely dependent on imports, out of the limited stock of vials imported on April 26, 3,245 were allocated to States the next day and an additional allocation of 6,655 vials was done on April 30 to States. Another 1,200 vials have been kept for Central allocation by the Health Ministry, it pointed out.

“It is stated that about 6,478 vials have been supplied till May 7. Efforts are underway to procure, import more Tocilizumab,” it assured.

35 years later, Maliana’s wounds may have healed but the ache remains

Food and Civil Supplies Minister G.R. Anil has said the government will continue its various schemes to ensure the State remains hunger-free. The Food...
Read more

A man in his early 20s spent about three days with his mother’s body at their apartment at Vimala Devi Nagar in Malkajgiri police...
Read more
- Advertisement -