Happy with show despite loss: Panghal 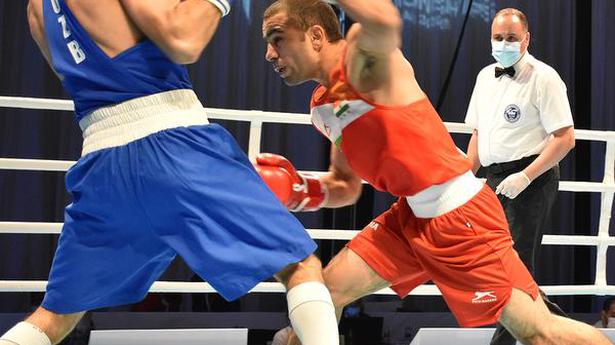 He is still a bit angry about that “unfair” loss in the final but Olympic-bound Indian boxer Amit Panghal (52kg) on Wednesday described his silver-winning performance at the Asian Championships as the best of his career.

The 25-year-old was the defending champion before he lost to his nemesis, Uzbekistan’s reigning World and Olympic champion Shakhobidin Zoirov, 3-2 in Dubai. A protest, seeking a review of the bout’s second round, was rejected by the jury.

“This is by far the best performance by me in the 52kg category. I should have won that final and I was angry when I did not,” said Panghal, the reigning Asian Games champion.

“I had given it my all and I felt I deserved to win but it’s OK, it can happen. It was still way better than the last time I lost to him. The scoreline has narrowed down to 2-3, it was 0-5 earlier,” he said referring to the Worlds final loss to Zoirov in 2019.

Proud of his performance he might be but Panghal said there are some chinks in the armour that he hopes to iron out before the Olympics.

“I have improved but my third rounds can be better. I don’t think I land enough scoring punches in the third round. I have improved enough to ensure that my first rounds start early, I used to hold back earlier,” he elaborated.

Panghal’s performance through the Asian Championships was quite compelling. If his pace was eye-catching in the quarters, the semifinal win was a master-class in effective close range boxing.

A new-found ability to score through body shots while being held in clinches was another addition to his skill set. “This was the first time, I tried that (punching during clinches),” Panghal said.

“It is something that my personal coach Anil Dhanker ji taught me. He told me that clinches should not be about stopping, that I should keep hitting. I had worked on this,” he added.

Panghal said he has his concerns about the pandemic but they wouldn’t come in the way of what he does inside the ring.

“Practice mein to disruption hua hi hai (Our practice has been disrupted). Another fear that we face is that if we test positive and are put in quarantine, we would miss out on crucial training time. We cannot afford that now.

He promises to be at his best at the Olympics.

“Pehla Olympics bhi hai, saath mein COVID bhi hai (My first Olympics and this COVID is also there). Let’s see what happens but I intend to make it special,” said Panghal.

One person was killed and eight people were wounded following an overnight shooting at a large party in...
Read more
National

Mumbai Indians skipper Rohit Sharma won the toss and opted to bowl against Delhi Capitals in their final league match of the Indian Premier...
Read more

The Indian men’s team picked up its second gold medal this year, while the mixed team collected the bronze and Mohan Bhardwaj secured his...
Read more
- Advertisement -