Hoping for a sweep, DMK settles for victory 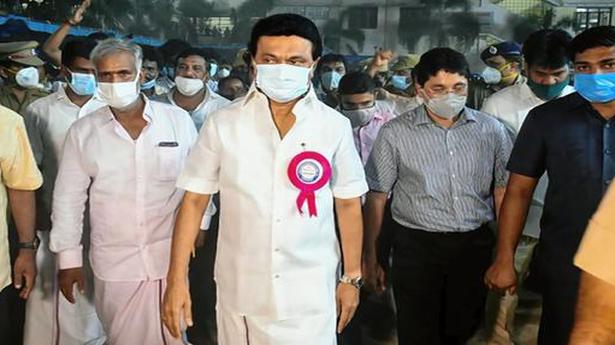 Despite a win, the number of seats secured has come as a disappointment to the winning front

Despite winning the Assembly election, the number of seats secured has come as a disappointment to the DMK leadership, as party president M.K. Stalin had repeatedly said that it would outdo its earlier performances in Assembly polls this time.

“Earlier, I had said that we would win 200 seats. Now I say we will bag all 234,” was his common refrain during campaigning.

Though an exaggerated claim, he had reasons to believe his predictions for a landslide win — only two years ago, when the BJP, led by Prime Minister Narendra Modi, swept the Lok Sabha poll with a brutal majority, the DMK and its allies had stopped its entry in Tamil Nadu.

The AIADMK, which went to the poll with the BJP, also bore the brunt and had won just one Lok Sabha seat.

Prior to the Assembly election, the DMK sought to capitalise on NEET and other vital issues, and started aggressively targetting the BJP, hoping to repeat its 2019 Lok Sabha performance.

Even during seat-sharing talks, the DMK played its cards carefully to avoid a situation in which it would be under the mercy of its alliance partners. Opinion polls and exit polls gave 160-plus seats to the DMK alliance.

The DMK has swept the polls in Chennai and its neighbouring districts like Chengalpattu, Kancheepuram and Tiruvallur and the Delta districts. But the Western region that let down the AIADMK in the Lok Sabha poll proved the savior once again for the ruling party.

Top AIADMK ministers like S.P. Velumani, P. Thangamani and C. Vijayabaskar, too, specifically targeted by the DMK earlier and during the campaign, emerged unscathed in the election. Efforts by the DMK to rope in activists like Karthikeya Sivasenapathy to defeat Mr. Velumani also failed to materialise.

The outcome clearly shows that voters are not ready to embrace the DMK in toto, even though they rejected the BJP in the Lok Sabha polls.

“While we welcome the change, we did not expect the AIADMK to perform this well in the election,” said CPI(M) Polit Bureau member G. Ramakrishnan, an ally of the DMK.

He felt while a detailed analysis of factors contributing to the performance of the AIADMK needs to be carried out, the caste factor and an unprecedented use of money by the ruling party might have helped it in the western region.

Mr. Ramakrishnan rejected the argument that Hindu votes had consolidated in favour of the AIADMK-BJP alliance this time, saying that if that was the case, the DMK could not have won in other areas.

Viduthalai Chiruthaikal Katchi (VCK) general secretary and MP Thol. Thirumavalavan also shared the view of Mr. Ramakrishnan that the opposition could not match the money power of the AIADMK.

The Krishna district police will organise a ‘Dine with family members’ programme with the staff at all police stations. Officers will invite the family...
Read more