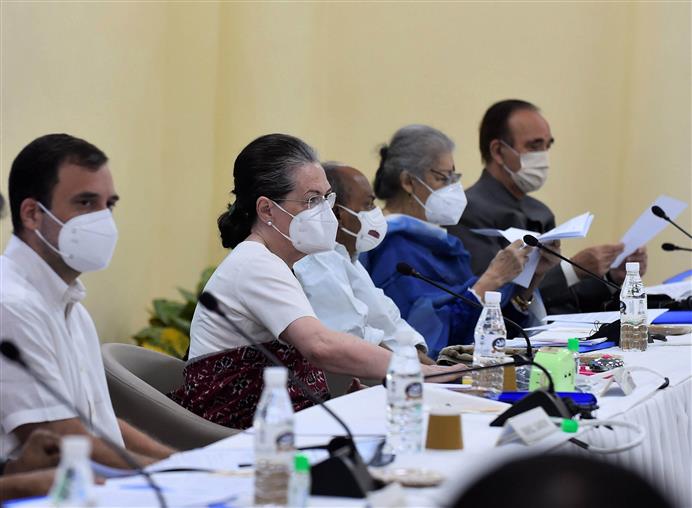 Sonia Gandhi on Saturday firmly told the Congress Working Committee that she is a “full-time and hands-on Congress president”, days after G-23 leader Kapil Sibal had said that no one knew who was taking decisions in the party since there was no elected president.

Putting the Congress organisational election schedule on the table, Gandhi took on dissenters within and said they don’t need to speak to her through the media.

“I have always appreciated frankness. There is no need to speak to me through the media. So let us all have a free and honest discussion. But what should get communicated outside the four walls of this room is the collective decision of the CWC,” she said at a time when several veterans, including Ghulam Nabi Azad and Anand Sharma, have been voicing anxieties over the sliding Congress strength and exodus of leaders besides demanding internal elections.

Sonia in her opening remarks said, “I am, if you will allow me to say so, a full-time and hands-on Congress president. Never have we let issues of public importance and concern go unaddressed. You are aware that I have been taking them up with the Prime Minister as have Dr Manmohan Singh and Rahul ji. I have been interacting with like-minded political parties regularly. We have issued joint statements on national issues and coordinated our strategy in Parliament as well.”

Apart from addressing internal issues, Sonia also attacked the government for mishandling the farmers’ agitation and for the spate of killings in Jammu and Kashmir.

On the government’s reaction to a flailing economy, Sonia said the Centre’s single-point agenda is, “Becho becho becho.”

On the farmers’ issue, Sonia said the shocking incidents at Lakhimpur Kheri recently betrayed the mindset of the BJP, how it perceived the Kisan Andolan, how it had been dealing with this determined struggle by farmers to protect their lives and livelihoods.

She was silent on the Singhu killing of Friday.

The Congress chief, however, commented on the killings in J&K saying, “In recent days, there has been a sudden spurt in killings in Jammu and Kashmir.  Minorities clearly have been targeted. This must be condemned in the strongest possible terms. We have done so and I do so again this morning. J&K has been a Union Territory for two years. The entire responsibility for bringing the perpetrators of these barbaric crimes to justice is that of the Union Government. Restoring social peace and harmony and confidence among the people of J&K rests with the Modi government.”

She also accused the government of disturbing the broad domestic political consensus on foreign policy saying, “Foreign policy has become a diabolical instrument of electoral mobilisation and polarisation. We face serious challenges on our borders and on other fronts. The Prime Minister telling the opposition leaders last year that there had not been any occupation of our territory by China and his silence ever since is costing our nation dearly.”

The CWC would also be hearing of the party’s preparations for the forthcoming assembly elections with Sonia stressing the need for unity and discipline to win.

“Undoubtedly, we face many challenges but if we are united, if we are disciplined and if we focus on the oarty’s interests alone, I am confident that we will do well,” she said.

According to the organisational election schedule shared at the CWC, the Congress president’s election is proposed to be concluded by September 2022.