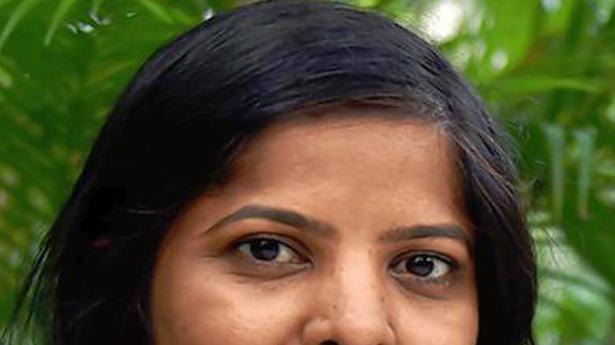 Film-maker Leena Manimekalai’s Maadathy: an Unfairy tale, a story about sexual assault suffered by a young Puthirai Vannar girl from men from another Dalit caste more dominant, said that she relishes “participatory film-making,” at an online screening of her much-talked about film organised by the Gender, Women and Sexuality Studies unit of the University of Minnesota on Friday.

Speaking about her film, Ms. Manimekalai said she wanted to be a medium to tell stories of people she empathises with.

“When I see (films from) mainstream industry, I see nothing about my people. So since 2002, I took a small digital camera, cheap microphones and pirated editing tools and went to villages, spoke to people and told the truth that I found to the rest of the world. In 2003, I made my first short documentary, Mathamma. In my first feature Sengadal, I told the story of refugees… refugees played refugees, the fisherfolk played the fisherfolk and I played the documentary film-maker. I started to relish participatory film-making. I was trying to erase myself and be a medium to tell stories of people I empathised with,” Ms. Manimekalai said.

She went around 40 villages in Tirunelveli and met men, women and elders to understand their stories. She adapted Anavan Kudiyiruppu near Papanasam to set the film.

“Murthy ayya, the first generation graduate Puthirai Vannar who also retired as a government employee, gave me access to the community. I interviewed them, wrote several drafts but told them that I cannot tell stories without you. Puthirai Vannars are Dalits within the Dalit community. They are unseeables. While for the main characters, we had to bring in actors, for other characters, the people from the village played them. They were giving creative inputs, ran the production, took care of us and carrying the film equipment. They protected us,” she said.

The film’s co-producer, Bhavana Goparaju, said she was compelled to tell stories that are not being told in the mainstream film industry.

“It has been challenging. As a writer in the Indian film industry I have been experiencing a few challenges, which led me to get into production. I believe in telling stories that are unheard yet. I have been an activist and I feel that I have the privilege to have opportunities and pursue it. I wanted to break the glass ceiling,” she also said.

The discussion was moderated by Roja Suganthy-Singh of St. John Fisher College, who also runs the Dalit Solidarity Network in the U.S.