Israeli opposition closing in on deal to unseat Netanyahu 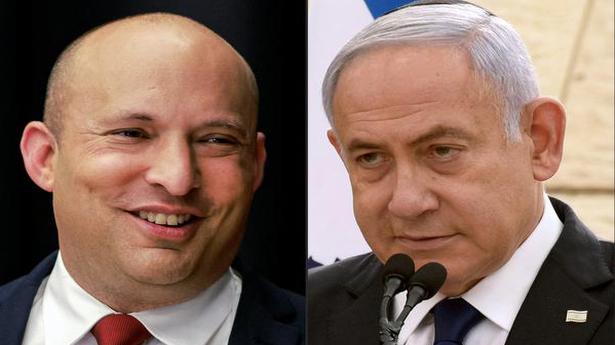 Israeli far-right politician Naftali Bennett will deliver a statement on Sunday, in which he is widely expected to throw his crucial support behind a “government of change” to unseat Prime Minister Benjamin Netanyahu.

Opposition chief Yair Lapid, who has until Wednesday to put together a coalition after the fourth inconclusive election in two years, was closing in on an alliance of right-wing, centrist and leftist parties, Israeli media reported.

Mr. Lapid’s chances of success rest with Mr. Bennett, a 49-year-old former defence chief whose Yamina party’s six seats in the 120-member Parliament are enough to give him the status of kingmaker.

Under the prospective power-sharing deal, Mr. Bennett would replace Mr. Netanyahu, 71, as Prime Minister and later give way to Mr. Lapid in a rotation agreement.

The new coalition’s diverse members would have little in common apart from a plan to end the 12-year-run of Mr. Netanyahu, Israel’s longest-serving leader.

Mr. Bennett is widely expected to announce that he will team up with Mr. Lapid, whose centrist Yesh Atid party was placed second to Mr. Netanyahu’s Likud in a March 23 election.

Israel’s YNet website said Mr. Bennett told the lawmakers that he was “marching towards a government of change”.

An anti-Netanyahu coalition would be fragile and require outside backing by Arab members of Parliament, who oppose much of Mr. Bennett’s agenda, which includes more settlement building in the occupied West Bank and its partial annexation.

It would be expected to focus on the economic recovery from the COVID-19 pandemic, while setting aside issues on which members disagree, such as the role of religion in society and Palestinian aspirations for statehood.

Trying to scupper an opposition deal, Mr. Netanyahu made a three-way counter-offer on Sunday to stand aside in favour of another right-wing politician, Gideon Saar.

Under that blueprint, Mr. Saar would serve as Prime Minister for 15 months, Mr. Netanyahu would return for two years, and Mr. Bennett would then take over for the rest of the government’s term.

“We are at a fateful moment for Israel’s security, character and future, when you put aside any personal considerations and take far-reaching and even unprecedented steps,” Mr. Netanyahu said in a video statement about the proposal.

However, Mr. Saar swiftly rejected the offer, writing on Twitter: “Our position and commitment are unchanged — to end Netanyahu’s rule.”

Minister inaugurates 3-day conference of the Indian Institute of Architects Disclaimer: This post has not been edited by our staff...
Read more
Entertainment

Kangana Ranaut, who never minces her words, has yet again spoken in support of South films. Hailing their ability to stay connected with their...
Read more
National

Minister for Housing Jogi Ramesh said that the State government will come to the rescue of the farmers who lost their crops due to...
Read more
Trending

The Centre has discontinued the tide-over allocation of wheat to the State amid concerns of a fall in stock available with the Food Corporation...
Read more
- Advertisement -

Pakistan will go ahead with tour of Sri Lanka: Cricket Board

"We are always ready to support Sri Lanka Cricket even in difficult times and we have no issues touring the country for the test...
Read more

As many as 57 people were killed in the suicide blast at the Ahle Tashih mosque of Kucha Risaldar in Peshawar on March 4 As...
Read more
- Advertisement -