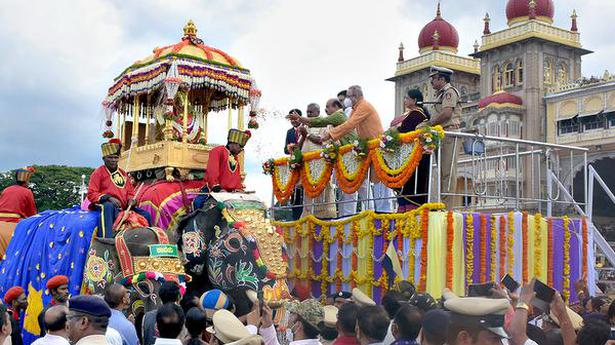 Celebrated under the shadow of COVID-19 for the second successive year, the Dasara festivities concluded here on a high note on Friday with the famous Jamboo Savari that was scaled down as a part of a low-key celebrations, confined to the palace premises.

Contrary to what was announced that only 500 people would be allowed to the event in view of curbs over pandemic situation, the turn-out was much larger and it looked like celebrations in a normal year. The palace confines were swarming with people, and the COVID-19 norms were thrown to the winds.

The event was livestreamed on various platforms to keep the people indoors but the audience was much larger with thousands in attendance.

The celebrations that began on a traditional note on October 5 with former Chief Minister S.M. Krishna inaugurating the “Nada Habba” atop Chamundi Hills, came to an end with an impressive finale.

It was tusker Abhimanyu’s second Dasara as the lead elephant and it performed its tasks with majesty – carrying the 750-kg golden howdah with the idol of Goddess Chamundeshwari placed in it – in the company of caparisoned Kumkhi elephants. The howdah or the Ambari was bedecked in flowers while decorated Abhimanyu was a treat to watch.

Chief Minister Basavaraj Bommai’s “Nandi Dwaja” puja outside the palace signalled the start of Vijayadashami procession. He, accompanied by other dignitaries, showered flower petals on the idol of Goddess Chamundeshwari placed in the howdah.

The usual scenes of cheering crowds, watching the grand proceedings from sitting atop the trees and tall buildings, along the usual procession route were missing as the event was confined to the palace and ended in less than an hour with a nominal presence of cultural troupes and tableaux.

The government, despite the pandemic under control, decided to keep the festivities low-key as a precautionary measure, following advice from experts. However, it allowed an expansive illumination, with all other Dasara events, barring the cultural programmes at the palace, cancelled.

Rain in the evenings during Navaratri played spoilsport. However, the cultural events at the palace saw connoisseurs of music turning up to watch the music and dance shows.

The grand Dasara illumination was the best part with lighting this year done in a radius of 102 km, with more roads and streets, and junctions colourfully lit to enliven the festive spirit. People thronged the streets to glimpse the brightly lit roads and of course the palace, causing traffic congestion.

The celebrations relatively helped the hospitality sector compared to last year with hotels and restaurants making good business, as the festivities, despite being subdued, managed to draw some crowds. The reason: vaccination coverage and sharp drop in COVID-19 cases.

The Chief Minister’s statement during Dasara inaugural that next year’s Mysuru Dasara would be a grand affair, provided the pandemic is fully combated, has rekindled hopes of stakeholders who want the early revival.

The people banking on tourism for their livelihood are optimistic as the pandemic dealt a hard blow to the industry, triggering an unprecedented crisis. Though the inter-state tourists were either nil or less and the footfall was mostly of the locals and those from neighbouring districts, the stakeholders are positive that Dasara has given a head start, sustaining and helping the tourism sector recover.