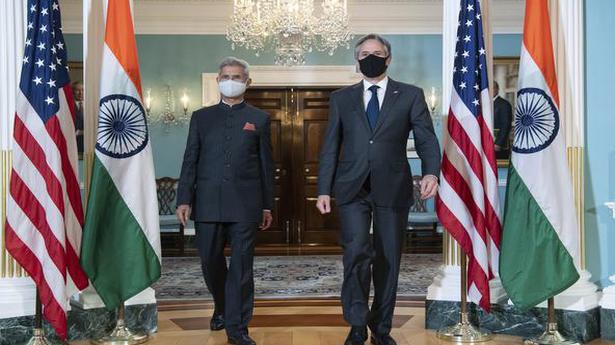 In brief remarks to the press before their meeting began , Mr. Blinken said the partnership between the two countries was “vital”, strong” and “increasingly productive” and that they had “a lot” to discuss. He said the two countries were working together on so many of “the most important challenges of our times,” and mentioned that the countries were working together to deal with COVID-19 and climate change. Mr Blinken highlighted the bilateral partnership, the partnership with the Quad and UN institutions, during his opening remarks.

“Our relations have grown stronger over the years,” Mr. Jaishankar said, adding that he expected them to continue to do so. Mr. Jaishankar noted that this was the first Cabinet level visit from India to the Biden administration and expressed his thanks to the United States and the administration for its solidarity and support to India “at a moment of great difficulty” for the country. The U.S. public and private sector and individuals have mobilized over $500 million in assistance to India in recent weeks, to help it battle COVID-19.

The messaging from the Biden administration has consistently been that during 2020, when the U.S. was in the throes of the pandemic, India had stepped in to help (such as by sending pharmaceutical products). On Friday. Mr. Blinken re-iterated this message.

“We know, we remember, in the earlier days of COVID, India was there for the United States…something we’ll never forget,” he said. “Now we want to make sure we are there for and with India.”