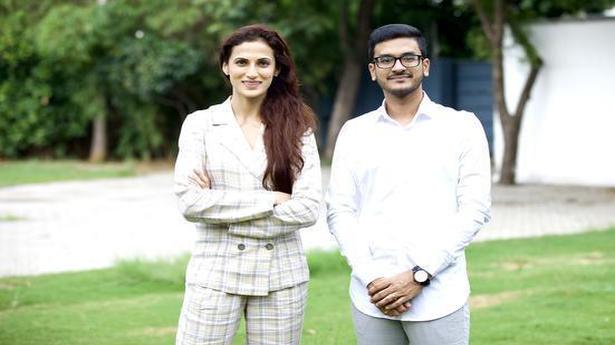 Meet Kanthi Dutt, the 21-year-old from Hyderabad who hopes to capture 5% of India’s e-commerce market by 2026

At first glance, Hyderabad-based entrepreneur Kanthi Dutt might come across as a whiz kid who broke convention. His baby entrepreneurial steps began in school, and now at 21, he has a bunch of start-ups to his credit, including SustainKart — an e-commerce marketplace for sustainable goods — founded in January 2021 with Shilpa Reddy, a designer, health and fitness enthusiast and an advocate of eco-conscious living.

SustainKart is now poised for international expansion, fueled by the popularity of the YouTube channel Sustainable Living with Shilpa Reddy, which was launched in September 2020.

Kanthi measures his words. If he didn’t pursue higher studies after school, he underlines that it was a personal choice: “I scored 94% in CBSE Class XII,” he says, dispelling any notion that he might have been an under-performer who found solace in activities outside of the curriculum.

He recalls his days at Sri Satya Sai Vidya Vihar, Visakhapatnam, where he studied till Class X: “When I was part of a three-hour dance performance for which we were trained by visiting music and dance teachers, I got to know that some of them faced financial struggles. I wanted to do something to help them.”

Kanthi mooted the idea of ​​a voluntary organization and launched the Spartans Cultural Trust when he was in Class VIII. Singer SP Shailaja attended the inaugural event and became a mentor, guiding Kanthi and fellow students in their endeavour. He began coordinating small events, with funds pooled in from family and friends to pay the invited artistes.

The initiative was met with approval from his parents — civil engineer father and homemaker mother (who now handles his finances). “They guided me to take one step at a time,” says Kanthi.

He also launched Spartans Media, a brand management and marketing firm, in 2014. In the meantime, his school attendance thinned: “I gave up on institutional education after Class XII, when I was sure that I had enough clients to sustain the business. It was gradual and my parents were very much with me in my journey.”

Lydian Nadaswaram’s concert and the Telangana State food festival at People’s Plaza, Hyderabad, were among the events conducted by Spartans Media.

In 2020, once the pandemic set in, he noticed conversations veering towards sustainability and planet-friendly practices. He had met Shilpa Reddy on a few occasions and observed her interest in sustainable living. He broached the idea of ​​a YouTube channel where she could host conversations about sustainability.

“When a 20-year-old approaches you with an idea, it’s natural to think if he can deliver. I noticed that he was brilliant in his research and knew how to connect people and ideas,” says Shilpa. She was not keen to take on more responsibilities than she could handle, and he assured that there would be technical support.

The synergy worked. Having Shilpa on board helped the channel invite well-known personalities to share insights into their lifestyle and how they made one planet-friendly change at a time.

Shilpa interviewed actors Nagarjuna, Amala and Samantha Akkineni on their switch to sustainable practices, Vani Murthy on day-to-day lifestyle changes that can be made, among many others. “We also addressed issues such as water conservation and how to reduce microplastics in the environment,” says Shilpa.

Gradual, Shilpa and Kanthi were inundated with requests for sponsorships and to feature brands dealing with sustainable products on the channel. Understanding that several paid promotions could dent the channel’s credibility, Kanthi and Shilpa decided to launch SustainKart, as an e-commerce platform that can sell a wide range of eco-conscious products — personal care, skincare, wellness, clothing, lifestyle, décor and food.

SustainKart was launched in January 2021. The feedback was positive, while some also pointed out that these products were priced higher than regular products. Kanthi asserts that price points are likely to reduce only when the demand for sustainable goods go up.

Expansion plans are underway: “We plan to venture into international markets, beginning with Australia in December 2021. We want to also launch our label in various segments — skincare to food, décor to fashion, and furnishings to pet care,” says Kanthi.

By 2026, he hopes that SustainKart can make inroads into 5% of India’s e-commerce market, generating revenue of four billion dollars: “That would also mean 5% of consumers are making a conscious choice to be sustainable,” he sums up.

Income Tax Calculator: After rising to 19-month high in March 2022, gold prices have nosedived after US...
Read more

With the retail prices of wheat and wheat flour rising by 14-20% in the last one year, the government, on May 13, banned wheat...
Read more
- Advertisement -