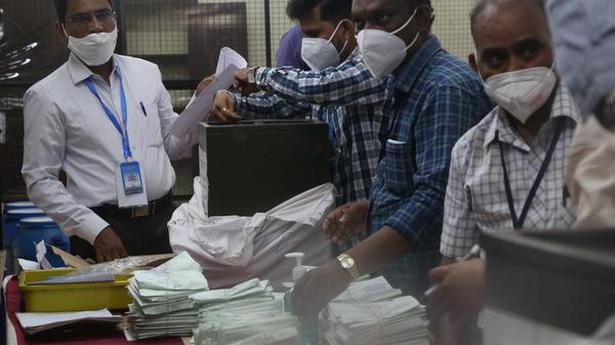 The bypolls to Belgaum and Basavakalyan took place following the death of the sitting public representatives Suresh Angadi (BJP) and B. Narayan Rao (Congress) due to COVID-19; Maski due to the disqualification of Congress MLA Prathapagouda Patil

The ruling BJP is leading in the bypolls to Belgaum Lok Sabha constituency and Basavakalya Assembly segment whereas Congress is leading in Maski.

Mangala Suresh Angadi, the BJP candidate, is leading against Congress candidate Satish Jarkiholi in the Belgaum constituency by margin of around 12,000 votes.

In Basavakalya, BJP’s Sharanu Salagar is leading by about 4,400 votes against Mala B Narayan Rao, whereas Maski Congress candidate Basanagouda Turuvihal is ahead of BJP candidate Prathapagouda Patil by almost 8,000 votes.

The bypolls to Belgaum and Basavakalyan took place following the death of the sitting public representatives Suresh Angadi (BJP) and B. Narayan Rao (Congress) due to COVID-19.

Maski seat fell vacant due to the disqualification of Congress MLA Prathapagouda Patil.

Patil was among the Congress MLAs who had resigned from the Assembly in 2019. He was disqualified and later joined the BJP to contest the bypoll.