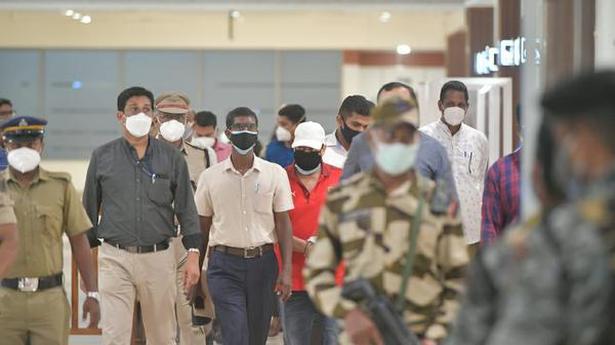 Besides beauty parlour case, his links to other cases in State also under scanner

A day after he was flown in from Bengaluru on a nine-day custody, the Anti-Terrorist Squad (ATS) of the Kerala Police has started grilling gangster Ravi Pujari from Thursday.

He is reportedly being interrogated at a Crime Branch facility in Thripunithura. While his custody was in connection with the firing outside the beauty parlour owned by actor Leena Maria Paul in Kochi on December 15, 2018, it is learnt that his alleged links to other cases in Kerala may also come under the scanner. He had in the past rung up politicians and media persons in the State either allegedly for threatening them or to stake claim to the incidents here.

He reportedly had threatened a senior Congress leader over phone in 2016 while Kerala Janapaksham (Secular) leader P.C. George had also gone public about receiving alleged threatening calls from the gangster over the feisty politician’s stance in favour of bishop Franco Mulakkal who is an accused in a rape case.

In the days leading to the firing incident, the gangster had allegedly rung up Ms. Paul demanding around ₹25 lakh about which she had alerted the police then. Shortly after the incident, he had rang up a local news channel claiming responsibility.

ATS was handed over the probe after the Crime Branch had arrested two accused, alleged hirelings of the gangster, and recovered the firearms used. Two more accused remain to be nabbed and they are suspected to be abroad. The interrogation of Pujari, the third accused in the case, is expected to help track them.

The gangster was arrested in Senagal in 2019 and was handed over to the Bengaluru police. He had been lodged at the Parappana Agrahara Central Prison in Bengaluru since then.

His custody period will end on June 8.