‘Mann Ki Baat’: India has given befitting response to those who conspire against it, says PM Modi 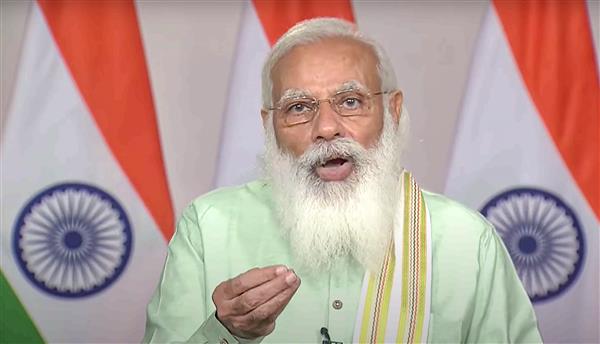 Prime Minister Narendra Modi on Sunday said India has witnessed well-rounded progress and development during the last seven years against odds and has given a befitting response to those who conspire against it.

Modi government has completed seven years since it assumed the reins in 2014.

In his monthly radio address ‘Mann Ki Baat’, Modi said that during the last seven years, the country demonstrated its resolve to stand up to international pressure, and armed forces’ determination to secure the borders.

“The country has given a befitting response to those conspiring against it,” Modi said, listing the achievements in the seven years of his rule.

He said there was peace in the country stretching from northeast to Jammu and Kashmir.

The country has made rapid and long strides in the field of space technology and programmes by launching satellites.

The country is also witnessing a heightened sense of awareness towards “Swachhta”-cleanliness.

Penetration of power supply to villages that had no electricity during the past 70 years, road connectivity in villages, providing houses under Pradhan Mantri Awas Yojana, and the succour provided through Ayusuh Bharat Yojana were among the achievements highlighted by Modi.

He referred to the Jal Jeevan Mission (JJM) under which 4.5 crores rural households have been provided piped drinking water since 2019. As many as 15 months of the mission’s implementation was accounted for by the turbulence caused by the Covid pandemic.

Before JJM was launched, only 3.5 crores households had piped water connections.

“The achievements are of the entire country,” Modi said, and added, “We worked as Team India”.

“We worked with a vision of ‘Sab ka saath, sab ka Vikas, and Sab ka vishwaas'”.

He, however, underlined that the progress was spliced with challenges that tested the country’s resolve, and referred to the Covid pandemic with a focus on its second wave.

He said the country will eventually win the war against the pandemic.

He lavished praise on farmers and the agriculture sector, saying the produce has increased even during distressing times of the Covid.

Simultaneously there has been record government procurement of agricultural produce. Mustard was given a high MSP.

On account of ample food grains, 80 crore people from poor sections were given free ration during the pandemic period.

He said the country unitedly made a push back against Covid, which he described as the biggest natural disaster striking the world after over 100 years.

While the advanced countries were driven to their tether’s end during the first wave, India battled it successfully, he said.

Due to the sudden surge of the second wave of the pandemic, demand for medical oxygen increased manifold.

The country has ramped up Oxygen generation through new plants and other medical logistics. Before Covid, only 900 Metric Tonnes of Oxygen was generated in the country. Now, it has increased to 9,500 Metric Tonnes.

He lauded the armed forces, the Railways, the doctors, nurses and other categories of Covid warriors for their dedicated services, including reaching the medical Oxygen to the needy.

He commiserated with the families affected by the two Cyclones: Tauktae and Yaas.

He said the history of the country is that it rises in unison with the fortitude to meet challenges.