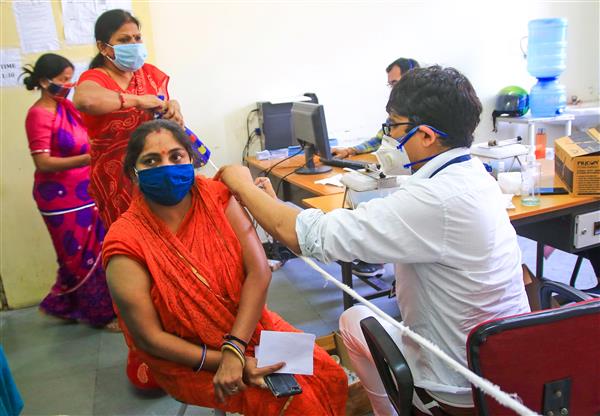 A day after the Centre flagged a media report on Covid-19 vaccine wastage in Rajasthan, Health Minister Raghu Sharma on Tuesday said the wastage in the state is less than 2 per cent, well below the “national average of 6 per cent”.

The state minister termed the media report cited by the Centre in its letter “false”.

In the letter to Sharma on Monday, Union Health Minister Harsh Vardhan said a media report has highlighted that more than 500 vials of Covid-19 vaccines were found dumped in the waste bins at 35 vaccination centres in the state, which is “not acceptable” and must be investigated.

In almost all districts of Rajasthan, vaccine wastage is more than the national average, which is less than 1 per cent, Vardhan had said.

In a video message, Sharma said, “The vaccine wastage in Rajasthan is less than 2 per cent, which is well within the 10 per cent limit set by the government of India. The average national wastage is 6 per cent”. There is zero vaccine wastage in the 18-44 age group, he said.

So far, Rajasthan has administered 1.70 crore Covid vaccine doses and the state has remained a front runner in vaccinating people since the beginning of the inoculation drive, he added.

In a letter to Vardhan, Sharma said the data given in the news report is “not correct”.

“I would like to inform you that the matter has been thoroughly enquired by our officers and it has been established that the news mentioned in your letter is misleading, false and not based on facts,” Sharma said.

“The statements recorded from all the concerned medical staff involved in vaccination in the health institutions mentioned in the news (report) clearly show that the facts are totally contrary to the news report and similar modus operandi was adopted to collect vaccine vials by misrepresentation,” he said.

At the health institutions, Sharma said, the media persons introduced themselves as officials from the state directorate of medical and health and as WHO representatives, he claimed.

Sharma further claimed that not a single vial was found in waste bins as mentioned by the media persons in their story.

“The act by the media persons is against the Central Pollution Control Board Guidelines for biological waste disposal, which state that the used/partially used vaccine vials can’t be taken out of the concerned health institution without properly disinfecting them for disposal,” he said.

A Covid-19 vaccine vial has to be discarded after four hours of opening. Sometimes, after opening a vial, the required number of beneficiaries does not turn up for vaccination and it has to be discarded in accordance with the government of India’s operational guidelines, Sharma said.

“It leads to some amount of wastage,” he said. —PTI