Submit life certificate by May 25 to continue pension: Defence ministry to ex-servicemen

Litigations to claim rights over sites at Varanasi, Mathura brings 1991 law into limelight 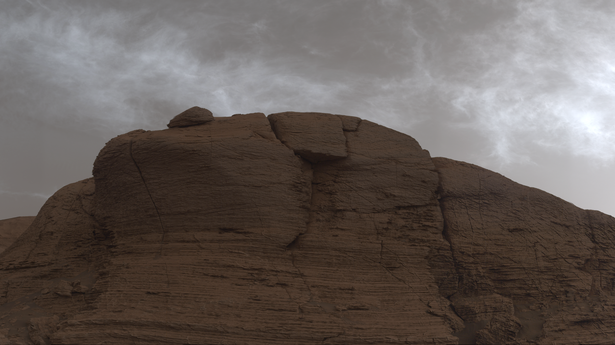 Most clouds on the Red planet hover at about 37 miles (60 kilometres) or lower in the sky, and are composed of water ice. The latest capture by Curiosity shows the clouds at a higher altitude, where it is very cold.

This picture was not shot from the Grand Canyon in the U.S. In fact, this image was not even photographed on Earth. This is a picture of Mont Mercou, a cliff on Mars. The contrast of grey clouds over the brown mountain was shot by NASA’s Curiosity rover on March 19, 2021 – – the day it completed 3,063 Martian days, (one day in Mars is called sol). The picture is a collection of 21 separate images stitched together and colour corrected so that the location appears as how it would to a human eye. The rover has been studying this cliff to better understand the Red planet.

While spotting clouds on Mars is rare, this capture by the rover is an even rarer phenomenon. That’s because, to the extent we know about the fourth planet, clouds typically appear during the coldest time of the year near Mars’ equator when planet is farthest from the Sun. Two Earth years ago (one full Mars year), scientists at NASA noticed clouds forming over the rover earlier than expected.

That’s when they decided to look deeper into this phenomenon early on. So, they started to track the “early” clouds in late January and spotted “wispy puffs” filled with ice crystals that scattered light from the setting Sun, some shimmered with colours. The Curiosity team analysing the clouds were more interested in how these ‘puffs’ are formed than in their spectacular displays.

Initial discovery and clues to next

When it made its first discovery of clouds on Mars, the team noted that, “The early-arrival clouds are actually at higher altitudes than is typical.” Most clouds on the Red planet hover at about 37 miles (60 kilometres) or lower in the sky, and are composed of water ice. The latest capture by Curiosity shows the clouds at a higher altitude, where it is very cold. This translates to a higher likelihood of clouds formed by frozen carbon dioxide or dry ice, NASA said in a blog post.

“I always marvel at the colours that show up: reds and greens and blues and purples,” Mark Lemmon, atmospheric scientist at Space Science Institute in the U.S., told NASA. “It’s really cool to see something shining with lots of colour on Mars.”

The findings are not final yet as scientists will need to do more analysis to know for sure which of the recent images photographed by Curiosity has water-ice clouds and which one has dry-ice ones. One of the clues scientists use to determine the altitude of the clouds is by looking at twilight clouds, also known as “noctilucent”. During sunset, the ice crystals in the cloud catches the fading light, which makes them glow against the darkening sky. They gradually darken as the Sun’s position in the sky drops below their altitude. This will help scientists calculate the position of the clouds in the sky.

Discoveries like this by the Curiosity rover helps scientists to better understand Earth’s neighbour, its topography and climactic conditions.

Kozhikode district has been put on high alert in the wake of the prediction of heavy rain and strong...
Read more
Entertainment

IPL 2022: KKR vs LSG live-stream, squad, timings and everything you...

Citing its COVID-free status and claiming that its socialist system was protecting its population from “a malicious virus”, North Korea had declined vaccine supplies,...
Read more

Pakistani Taliban extends ceasefire with military until May 30