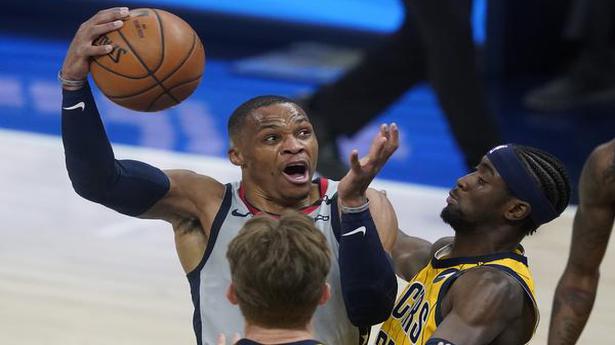 Another historic night from Russell Westbrook helped Washington Wizards to a 133-132 overtime victory over the host Indiana Pacers on Saturday.

Westbrook notched the 181st triple-double of his career (33 points, 19 rebounds and 15 assist) on Saturday, tying Oscar Robertson for the most in NBA history. Roberston established his record during an NBA career from 1960-74.

“Man, it’s unbelievable,” Westbrook said of matching Robertson. “I take a lot of pride in doing everything that impacts winning, as much as I can leave it on the floor. To be in a conversation with Oscar, one I just want to thank him, because he set the stage.”

Bradley Beal scored 50 points for the Wizards but missed overtime with a hamstring strain.

But he and the rest of the Wizards are focused on the standings, where their narrow victory in a game that featured 33 lead changes saw them inch ahead of the Pacers into ninth place in the Eastern Conference standings.

The seventh through 10th-placed teams will compete in the play-in tournament for a berth in the playoffs proper.

Another hot show from Curry

Among other teams fighting for play-in spots, Golden State Warriors notched a 136-97 rout of Oklahoma City thanks to Stephen Curry’s 49 points in three quarters. The win kept the Warriors ahead of the Memphis Grizzlies in eighth place in the Western Conference.

It was Curry’s fourth game this season with at least 11 three-pointers, an NBA record. Warriors coach Steve Kerr was running out of superlatives for his superstar. “I don’t know how to describe it,” Kerr said.

Despite the defeat, the Spurs remained two games ahead of the New Orleans Pelicans for the final play-in spot.

Utah Jazz improved its Western Conference-leading record to 50-18 with a 124-116 victory over the Houston Rockets.

The Eastern Conference-leading Philadelphia 76ers romped past already eliminated Detroit 118-104, while Brooklyn Nets had to battle for a 125-119 victory over Denver Nuggets that put it half a game ahead of the Milwaukee Bucks for second in the East.

A well-deserved opportunity for Keerthi James

Keerthi James was drawn to cricket not by watching it on television, but by watching her elder brother play it. She began playing the...
Read more

The domination of India in the Junior World Cup shooting in Suhl, Germany, continued with the team adding two gold and a silver in...
Read more