NBA | Pacers pile it on in rout of Thunder 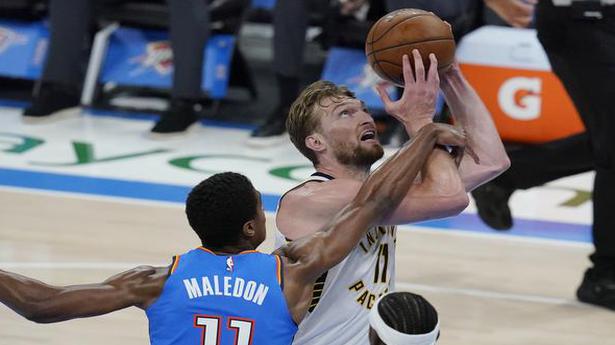 Domantas Sabonis had 26 points, 19 rebounds and a career-high 14 assists to lead the Indiana Pacers to a 152-95 blowout win over host Oklahoma City Thunder on Saturday.

The result was a home team’s largest margin of defeat in NBA history. The Pacers’ 152 points were the most in franchise history since the team moved to the NBA in 1976-77. The 57-point margin was the largest loss in Thunder franchise’s history.

Indiana flirted with the largest margin in NBA history — Cleveland’s 68-point win over Miami in December 1991 — with the Pacers leading by as many as 67 in the fourth quarter.

Bojan Bogdanovic scored 34 points, Rudy Gobert had a double-double and a couple of key late buckets, and short-handed Utah Jazz regained the top spot in the NBA with a 106-102 win over Toronto in Salt Lake City.

Dorian Finney-Smith canned the deciding 3-pointer with 9.3 seconds left to play and Luka Doncic racked up his first triple-double since March 15 as Dallas outlasted visiting Washington 125-124.

Bradley Beal put Washington in front with a pair of free throws with 26.1 seconds remaining before Doncic found Finney-Smith in the corner for his huge 3-point shot. Beal then missed the potential game-winning 3-pointer with 2.6 seconds to play.

A 13-0 run in the fourth quarter, 29 points from Terry Rozier and the return of LaMelo Ball to the lineup powered host Charlotte past Detroit.

Williamson made 14-of-17 field goals and added nine rebounds and tied a career high with eight assists. Ball scored a career-high 33 points while tying a career best with eight 3-pointers, and added 11 rebounds.

Nikola Jokic, with game-high totals of 30 points, 14 rebounds and seven assists, made another statement in his MVP candidacy, leading Denver to a road win over Los Angeles.

Stephen Curry exploded for 23 of his 30 points in the third quarter as Golden State turned an extended run into a road victory over Houston. Curry added six rebounds and five assists to his ledger.

Draymond Green flirted with a triple-double, producing nine points, 11 rebounds and eight assists for the Warriors.

Kendrick Nunn scored 22 points, leading Miami to a win over host Cleveland, while Trae Young scored 33 points to lead host Atlanta to a victory over Chicago.

Rookie Cole Anthony swished a deep 3-pointer with 0.1 seconds left to cap his season-best, 26-point performance and provide Orlando with a comeback victory over visiting Memphis.

Delhi Capitals coach Ricky Ponting on May 21 backed Rishabh Pant after his strategic blunder cost the team a spot in the play-offs,...
Read more

Mumbai Indians skipper Rohit Sharma won the toss and opted to bowl against Delhi Capitals in their final league match of the Indian Premier...
Read more