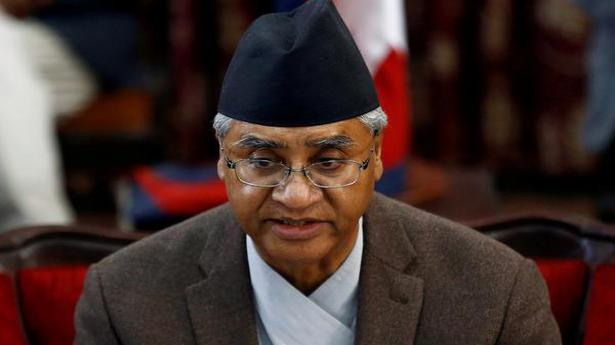 Prime Minister Sher Bahadur Deuba of Nepal has reached out to the Indian side with the recent visit of a high-level delegation led by former Foreign Minister Prakash Sharan Mahat. The substantial deliverables of the visit are not known yet, but the emerging political situation is likely to throw up major challenges for Mr. Deuba that he may find easier to negotiate with India’s support.

The biggest challenge for Mr. Deuba is fast emerging from within his party, especially from vice-president of Nepali Congress (NC) and former Deputy Prime Minister Bimlendra Nidhi. Mr. Nidhi had been a solid supporter of Mr. Deuba in the past but it has been learnt that he has personally conveyed to Prime Minister Deuba that he will contest for the post of the president of the party in the convention scheduled next month. Accordingly, Mr. Nidhi has set up a separate unit for campaigning for the post in Thapa Gaon neighbourhood of Kathmandu.

The grand convention is significant as the outcome of the contest will determine the leadership under which the NC will fight next year’s election.

A section of the NC led by Mr. Nidhi is restless for change as they feel that the party has not accommodated the aspiration of the younger leaders for a long time.

Mr. Deuba had earlier conveyed to his party colleagues that he will be willing to accommodate such demands during the 15th convention but not during the 14th that is scheduled to take place next month. But the challengers are preparing to corner him as there are murmurs within the party about the prominent role that his wife, Arzu Rana Deuba, has been playing in crucial matters.

In recent weeks, Ms. Rana Deuba gained attention when she tied rakhi on visiting head of the foreign affairs cell of BJP Vijay Chauthaiwale. A senior leader said on condition of anonymity the rising profile of Ms. Rana Deuba is expected to come up during the convention.

The shadow of the challengers within the NC fell on Delhi during the visit of Mr. Mahat when he met External Affairs Minister Mr. Jaishankar and U.P. Chief Minister Adityanath. Observers had pointed out that the role of engaging India from the NC was earlier meant for Mr. Nidhi who maintains cordial ties with key figures of the Indian Government. The presence of Mr. Mahat for the same task revealed the growing fissures inside the NC.

The NC sources speculated that the real purpose of Mr. Mahat’s visit could have been to assure the Modi Government about Mr. Deuba’s pro-India sentiments to neutralise his challengers with support from New Delhi and Lucknow that can influence some of the NC leaders whose votes will matter in the convention. The NC gives special importance to the district level leaders of the party and a tight contest is expected on getting the majority of the votes from the NC leaders from all the 77 districts.

The growing internal challenge for Mr. Deuba’s three-month government is significant as the developments of the ruling parties have decided the course of politics over the last few years. Previous Prime Minister K.P. Sharma Oli was replaced by the Supreme Court after he went on an overdrive while dealing with challengers within the ruling Nepal Communist Party (NCP).

India-Nepal ties were disturbed in 2020 by the Kalapani territorial dispute but a more substantial issue this time around may be in Kathmandu because Mr. Deuba’s clout within his party will be reduced if he fails to keep the post of the president of the NC.