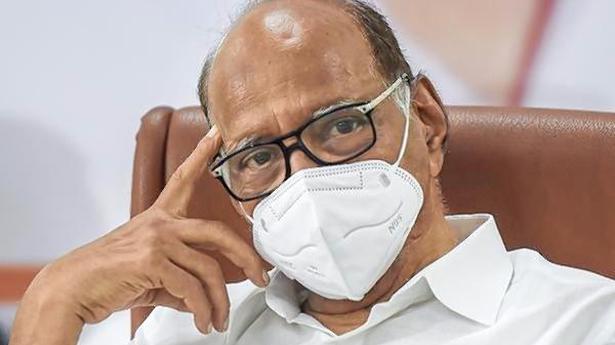 The Shiv Sena on Wednesday downplayed the recent meeting between Sharad Pawar and Maharashtra opposition leader Devendra Fadnavis, saying there is nothing “mysterious” about the interaction as the Nationalist Congress Party (NCP) chief’s stature is such that politicians including Prime Minister Narendra Modi keep consulting him on various issues.

The editorial in the Sena mouthpiece ‘Saamana’ also dismissed speculations suggesting political realignments in Maharashtra under “operation Lotus” post the meeting on Monday.

“There is no mystery or secrecy regarding the recent meeting between Fadnavis and Sharad Pawar. Those who feel that way don’t know Sharad Pawar well,” the edit said.

After the meeting, Mr. Fadnavis said it was a courtesy interaction with Mr. Pawar (80), who has resumed his activities after recovering from surgery.

The Sena heads the Maha Vikas Aghadi (MVA) government of which the NCP and the Congress are also constituents.

“Many speculations surfaced on the possible motive behind Fadnavis calling upon Pawar. Some started saying that ‘Operation Lotus’ is on in Maharashtra,” it said.

“However, what Fadnavis said was true. It was purely a courtesy visit. Pawar is not just a leader of Maharashtra but he belongs to the entire country. Political leaders including PM Modi consult him on various issues,” the Sena said.

The Sena referred to meetings between Indira Gandhi and socialist leader Jay Prakash Narayan to underscore that stature of some leaders is above politics like Mr. Pawar.

“Dialogue is important in a democracy. (then prime minister) Indira Gandhi had been defeated by the alliance of opposition leaders led by Jay Prakash Narayan. During Emergency, Indira Gandhi put several leaders in jails, but after her defeat, she used to meet Narayan to seek his blessings,” the Sena said.

In Maharashtra, several politicians would call on Sena founder patriarch Bal Thackeray at his residence ‘Matoshree’.

“Some leaders are above politics and Pawar is one of them. This is the reason why Fadnavis met him. It is good that Fadnavis met the right person to get positive energy,” the Sena said.

“….Those who know Pawar will agree that he must have coached Fadnavis on how to behave responsibly during a crisis. These days Fadnavis wants to oppose the government just for the sake of opposing it. He is blaming the MVA government for every happening in Maharashtra and the rest of India,” it said.

The Sena said when Chief Minister Uddhav Thackeray, who heads the party, was inaugurating trial runs of Mumbai Metro, BJP leaders were showing black flags at a protest and on the other hand, Mr. Fadnavis was meeting Mr. Pawar.

“Maharashtra has had a glorious tradition of Opposition leaders who would corner the government to get people’s work done expeditiously. If Fadnavis continues this tradition, his political graph would grow,” it said.

The Sena also took a swipe at the BJP over its ambitions to return to power.

“When Maharashtra is fighting the coronavirus pandemic, tackling cyclones, handling economic crisis how appropriate is it to dream about toppling a government which has a majority?” the edit questioned.

“…Sharad Pawar had made and broke several governments. He must have surely given Fadnavis some tips about how to play the role of an Opposition leader,” the Sena said.

The edit further said the topic of Maharashtra’s efficient handling of the pandemic compared with Uttar Pradesh, Bihar and some other States might have come up during the meeting between Mr. Pawar and Mr. Fadnavis.