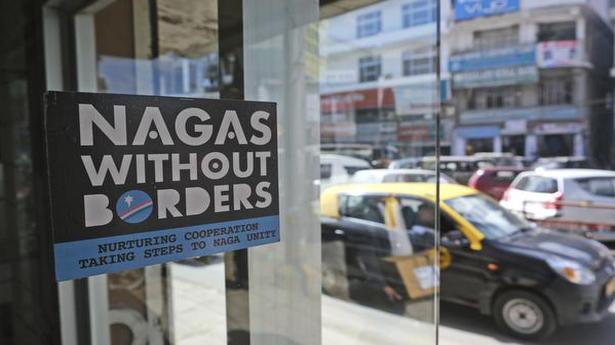 The resumption of peace talks with two sets of extremist groups has put the focus back on the Naga flag and ‘Yehzabo’ or constitution.

The Isak-Muivah faction of the National Socialist Council of Nagaland, or NSCN (I-M), said it would not forego the ‘Naga national flag’ and constitution for arriving at an honourable solution to the peace process that has consumed more than 24 years.

In a statement, the group said it would “not follow the forbidden route to the Naga solution that is linked to foregoing the Naga national flag and constitution, which is the face of the Naga political struggle and identity”. It also said that the “Naga flag with divine origin cannot be traded or bargained”.

The NSCN (I-M) had been insisting on a federal form of arrangement that allows the people across the Naga-inhabited landscape in the northeast to be a part of India but be governed by a separate constitution and identified by a separate flag.

The organisation also slammed New Delhi for indulging in divisive policy and flattery in the name of finding political solution. It also viewed rival organisations as being “made in India collaborators” planted to confuse and hoodwink the Nagas with high-sounding promises.

This was in reference to the meeting of the leaders of the Naga National Political Groups (NNPGs), a conglomerate of at least six extremist groups, with representatives of the Central Government on October 13.

Spiritual side of flag

“The Government of India assured of giving the Naga flag appropriate respect and position it deserves… The flag’s unrestrained political usage would be pursued post-solution democratically,” N. Kitovi Zhimomi, convenor of the NNPGs said, adding that Delhi was clearly told about the historical, cultural and spiritual side of the flag.

The NSCN (I-M) recalled past accords and agreements “never meant to be implemented in letter and spirit” to trash the “post-solution” proposition that “is being brought back to life” in desperation to “trap the Naga people again to accept whatever is being offered to hurry up the Naga talks”.