Offering a dignified last journey to the departed 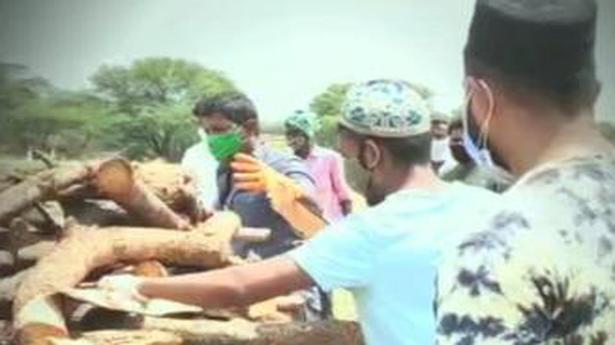 About three early in the morning of Monday Md. Sohel, a transport vehicle driver and resident of Siddipet, received a call informing him that someone had died due to COVID-19 in the town and the next of kin were unwilling to perform the last rites fearing the disease and there was no one else to take up the task.

Immediately Mr. Sohel called up his associates — Md. Hazi, Md. Parveez, Abbas, Md Moiz, Md. Azam, Shaik Anwar Hussain — and the team rushed to the spot and before sunrise ensured that the COVID victim, Karim Bi, who had died the previous night, was laid to rest in proper traditional manner.

Even as the group of youth completed their task they received another phone from Ramgopalpet village where a person had succumbed to the coronavirus. While on their way to Ramgopalpet village they spoke to this correspondent on phone and explained their mission.

On Sunday the team performed last rites for two persons. In one case in Peddagundavelli in Dubbak mandal, the victim was over 60-years of age, and died of a heart attack. He was reported to have been suffering from COVID-19 for over a week. Though the deceased had had three sons and two daughters, none of the members of the family came forward to perform the last rites fearing the infection, Mr. Sohel explained and added that they had encountered similar situations in the past.

The transport vehicle driver explained that the group of youngsters were paying for the entire expense of the last rites from their pocket for those who cannot afford it. While it cost them around ₹2000 for a burial, they had to spend between ₹3000 and ₹5000 for wood and other materials for a cremation. In fact the last three cases he and his team spent money from their pocket, he recalled.

“We have been encouraged by our elders to take up the honourable task of offering a dignified final journey to the departed as per their religious customs,” Mr. Sohel told The Hindu. “During the first wave of Corona also we had performed the last rites for the departed, but then deaths were not so many. In this wave the number of deaths have increased,” he added. Those who need such a service can call Sohel at 91604 10312.

Good Samaritans like Jameel, Chotu, Vazid and Sahdullah have been offering this service to the needy for past few days offering at Narsapur in Medak district. They are not charging any amount for the service.