Palasa cashew industry in deep financial crisis due to lockdown, fall in demand 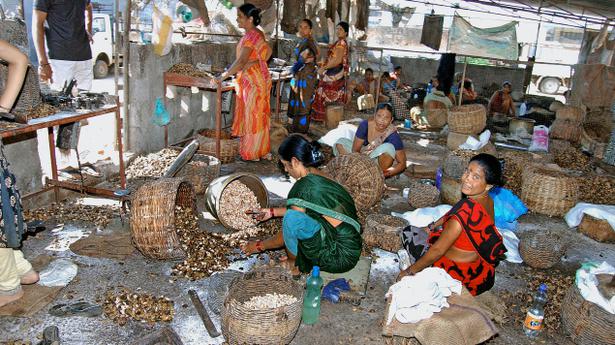 Hike in electricity and labour charges have dealt a big blow to the industry.

India’s famous cashew industry in Palasa, Srikakulam district, has been hit hard by various factors, including the partial lockdown imposed by the Andhra Pradesh government to control COVID-19.

A steep fall in demand for the nuts and hike in electricity and labour charges have dealt a big blow to the industry.

Normally, 500 tonnes of cashew is processed per day here but it fell to 200 tonnes in the last few days.

“The closure of restaurants and cancellation of marriages triggered a sharp fall in demand for cashew. The industry is already in dire straits due to last year’s lockdown and a drop in exports,” Malla Srinivasa Rao, president of Palasa Cashew Manufacturing Units’ Association, told to The Hindu.

According to him, many manufacturers are unable to overcome their financial distress since October, 2018 when Titli cyclone caused a devastation in the entire Uddhanam region, including the cashew-rich Palasa, and Kasibugga towns.

The overall loss inflicted by Titli is estimated to be ₹120 crore. The successive governments assured they would come up with a package but it was not implemented. Many manufacturers took bank loans for the revival of their units.

In spite of the best efforts, the industry could not get back on track in the last three years. A hike in labour charges is also cited as one of the reasons for the increase in production cost.

Currently, the manufacturers pay each labourer ₹26.50 for processing a kg of cashewnuts. The payment is ₹17.25 per kilo if nuts are cut by machines. The labourers involved in loading and unloading charge ₹9.55 per bag.

The Centre of Indian Trade Unions and other unions have given a strike call, demanding wage revision to mitigate the impact of inflation.

As many as 6,000 labourers, including women, are expected to participate in the strike from May 16.

The association is expected to hold a meeting with trade unions to explain its financial difficulties.

“We always give priority for the welfare of labourers. Many manufacturers run the units to ensure their livelihood. The unions should also cooperate with us for implementation of the new wage revision package from next year,” Mr. Rao said.