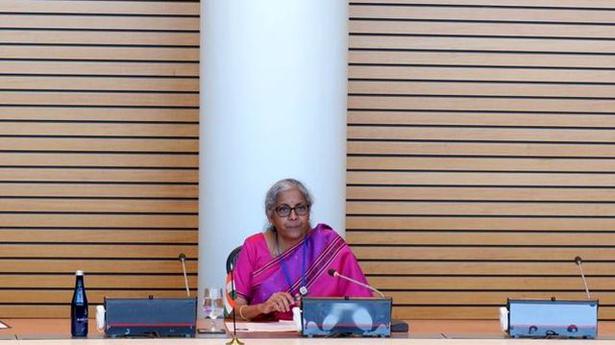 Developed countries have committed under the Paris Agreement to allocate $ 100 billion per year from 2020 onwards to facilitate emission cuts in poorer countries and also to effect technology transfer in this context.

Questions around how the $100 billion yearly commitment towards climate finance will be measured, and related technology transfer accounted for, remain unanswered, Union Finance Minister Nirmala Sitharaman said at the conclusion of the Washington DC leg of her U.S. visit. The Minister, who is in Washington for the World Bank/IMF Annual Meetings, bilateral dialogues with the U.S. and meetings with other countries, as well as the private sector, has repeatedly raised or discussed the issue of climate finance obligations in several meetings, as per statements and readouts.

“… We actually don’t know if there were any measures given to measure if money spent on a particular project by somebody will be part of that 100 billion, or what,” she said in response toa question from The Hindu on climate finance during a press conference on Friday evening.

Developed countries have committed under the Paris Agreement to allocate $ 100 billion per year from 2020 onwards to facilitate emission cuts in poorer countries and also to effect technology transfer in this context.

Ms Sitharaman said a similar issue existed with technology — what constituted designated technology for these purposes and how is the transfer measured.

“So funding is continuing to be a question of worry for many countries, as much as even the transfer of technology,” she said.

In the run up to the month-end U.N. Climate Change Conference (COP26) in Glasgow, India has come under pressure, especially from the U.S. and U.K, to announce more ambitious emission cuts, beyond what came out of its Paris commitments and to provide a deadline by which it will reach ‘Net Zero’’ emissions. India had said, in 2016, that by 2030 it would cut its emissions by a third relative to 2005 levels.

In return, it has argued that developing countries need space to grow and developed countries must move to a ‘Net Minus’ paradigm and meet climate finance obligations.

In response to a question on whether China was discussed in the context of debt sustainability and transparency , Ms Sitharaman said the topic was discussed but stopped short of mentioning China by name.

“I’ve definitely raised this issue of looking at sustainable debt funding and it has been in the minds of many countries. So discussions have happened,” she said.

A joint statement from India and the U.S. following a finance and economic dialogue led by Ms Sitharaman and U.S. Treasury Secretary Janet Yellen on Thursday said “ both sides affirmed their commitment to debt sustainability and transparency in bilateral lending.”

The finance minister left for New York on Friday evening where she has events through the weekend and Monday, including a Saturday roundtable with the U.S. India Strategic Partnership Forum and FICCI ( Federation of Indian Chambers of Commerce and Industry). On Sunday she is scheduled to attend the G30 International Banking Seminar ( a consultative group on monetary and economic issues). The minister’s trip concludes on Monday.

Floods and landslides have claimed 25 lives across three north-eastern States so far, with Assam being the worst hit.According to data provided by the...
Read more
- Advertisement -