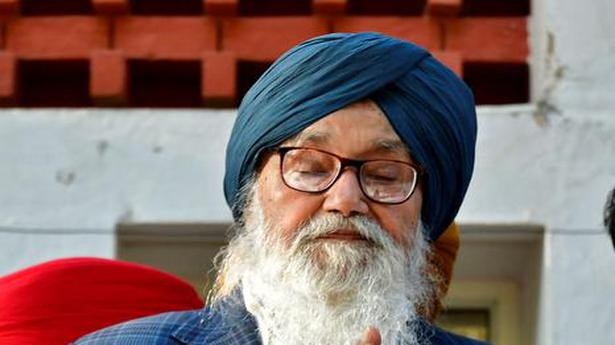 Mr. Badal said that it was very unfortunate that the Center has been usurping the rights of the States even on subjects which fall on the States List in the Constitution

Urging all political parties in the State to stop fighting among themselves and wage a united fight against Center’s decision to enhance the powers of the Border Security Force (BSF) in Punjab, five times Punjab Chief Minister Parkash Singh Badal has termed Center’s move as an attempt to turn Punjab into a Union Territory through the back door by handing it over to the central security forces like the BSF.

Mr. Badal said Centre’s decision will further weaken the already endangered federal structure of the country and will reduce the State government to the status of municipality. “This will be severe blow to the pride and dignity of Punjabi,” he said in a statement.

Mr. Badal said that it was very unfortunate that the Center has been usurping the rights of the States even on subjects which fall on the States List in the Constitution. He said that the Center had earlier legislated three laws on Agriculture, which is a State subject and now, with this move on BSF deployment, they have done the same encroachment on another State subject — law and order.

Mr. Badal appealed to the Prime Minister Narendra Modi to get both these encroachments rescinded by revoking the three laws on Agriculture and withdrawing the orders on BSF deployment.

“There is also strong ground to believe that the Center might be preparing to rob the state of its legitimate rights on its river waters. They might be conspiring to use this drastic new step to crush the farmers movement by blocking it at the farmers doorsteps in Punjab.,” he added.

The former Chief Minister, who is also the patron in chief of the Shiromani Akali Dal said that his party would not stand on prestige and would gladly join or follow any other party that is willing to lead the fight. “SAD wants no political limelight and would humbly cooperate with all other parties in a collective endeavor to safeguard Punjab’s interests. In fact, safeguarding Punjab’s interests is in the best overall interest of the country as we are the sword arm of the nation,” he said.

Mr. Badal said by giving sweeping powers to the BSF, the center has rendered Punjab Police totally irrelevant. “I am afraid we are back into the era of midnight knocks and searches of homes by security forces without valid orders or prior notice, and without any platform to seek relief as people can no longer turn to local leaders or officers for the redress of your grievances,” he said.