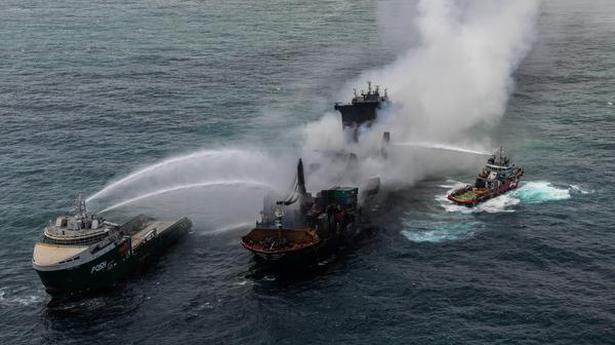 Petitioners seek a probe into incident.

Environmentalists and fisher groups in Sri Lanka on Friday petitioned the Supreme Court seeking a probe into how a container ship bearing dangerous chemicals and plastic material — that burned off the coast releasing massive debris — was allowed into the island nation’s territorial waters.

Their Fundamental Rights petition follows a nearly two week-long battle by the Sri Lankan Navy, with Dutch salvage experts and the Indian Coast Guard, to douse the flames onboard the Singapore-registered vessel, MV X-Press Pearl, that was anchored about 9.5 nautical miles off the Colombo port.

After the fire was extinguished on Tuesday, the vessel has been slowly sinking into the Indian Ocean, off the Sri Lankan coast, heightening fears of a possible oil spill that authorities said they were preparing to handle. Meanwhile, the prolonged fire on the vessel led to large deposits of plastic pellets along the island nation’s coastline, where several marine organisms were also found dead. Experts have termed the development the country’s “worst ecological disaster”.

Over the next two weeks, authorities will study the impact of the incident on Sri Lanka’s coastline, biodiversity and marine organisms, an official said. “We will be assessing the damage alone 125 km of our coastline that appears to be impacted by this incident,” A.H. Gamini, a director with the Coast Conservation and Coastal Resource Management Department told The Hindu.

According to the petitioners, including the Colombo-based non-profit Centre for Environmental Justice, and activists and trade union leaders from the fisheries sector, apart from the 325 tonnes of bunker oil, the vessel was loaded with 1,486 containers carrying chemicals, including 25 tonnes of hazardous nitric acid, caustic soda, sodium methylate, bright yellow sulphur, urea, and cosmetics.

Citing media statements made by the shipping company, the petitioners said “poor packaging” likely led to an “acid leak”, and on detecting the leak, the ship’s captain had contacted two ports — Hazira [Gujarat] on the west coast of India and Hamad in Qatar — requesting to offload the leaking containers. The requests were denied, and the ship made its way to Sri Lanka, they said, asking who cleared the vessel’s entry into Sri Lankan waters, and if permission was given despite knowledge of the “gravity of the risk”.

The Singapore-registered MV X-Press Pearl is almost brand new, made in China, and commissioned in February, AFP reported. It was en route to Singapore from Hazira Port in Gujarat, officials said. Shipping company X-Press Feeders’s CEO Shmuel Yoskovitz has apologised to Sri Lanka.

“I would like to express my deep regrets and apologies to the Sri Lankan people for the harm this incident has caused to the livelihood and to the environment of Sri Lanka,” he said in a media interview.