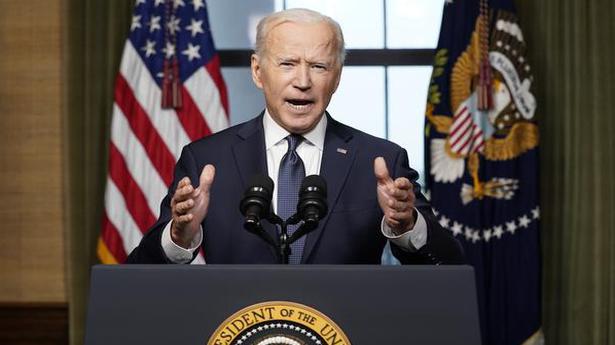 Speaking from Tulsa, Oklahoma, on the 100th anniversary of the Tulsa race massacre — in which an estimated 300 blacks were killed by white supremacists and many left homeless — U.S. President Joe Biden said he would “fight with every tool at my [his] disposal” to ensure the Senate passed its version of a voting rights Bill, the For the People Act, already passed a by the House of Representatives earlier this year.

The President also announced that he had appointed Vice-President Kamala Harris, who is African American and Indian American, to head the White House’s efforts to strengthen voting rights.

Describing the massacre in the Greenwood neighbourhood (called the ‘Black Wall Street’ as it was the most prosperous black neighbourhood in America at the time), accounts of which have not made it into most history lessons, Mr Biden described a belief that America did not belong to everyone. “A belief enforced by law, by badge, by hood and by noose,” he said following remarks after he met with survivors of the massacre, the youngest of whom is 100 years old.

Mr. Biden’s actions come at a time when Republicans on Capitol Hill and in state legislators are advancing legislation which they say is to curb voter fraud but Democrats say they are aimed at restricting access to the ballot box, especially for minority communities.

The President said the “sacred right” [voting] was under assault with “incredible intensity like I’ve never seen.” On Monday Texas’s Republican Governor, Greg Abbot, threatened to cut the salary of legislators after Democrats, on Sunday, boycotted a vote on a Bill they said would restrict voting and make it easier to overturn results. Florida, Arizona and Georgia have also passed voting restriction legislation this year.

During his remarks, Mr Biden also took a shot at two Senate Democrats who may make passage of the bill in the Senate a challenge: West Virginia’s Joe Manchin and Arizona’s Kyrsten Sinema, both of whom are in support of the filibuster (a process that requires a majority of 60 rather than a simple majority of 51) and have been known to not always vote with their Democratic colleagues.

Mr Biden characterised them as “two members of the Senate who vote more with my Republican friends.” [ The two Senators have however mostly voted along party lines as per the Washington Post].

“These bills seek to restrict the options that make voting more convenient and accessible, including early voting and vote by mail. Our Administration will not stand by when confronted with any effort that keeps Americans from voting,” Ms Harris said in a statement in which she committed to engaging with the public, community and voting rights organisations, and the private sector in the coming weeks.

Analysis by the Brennan Center for Justice says that at least 14 states enacted 22 laws between January 1 and May 14 this year that would restrict voting access. Overall, 389 “restrictive bills” have been introduced across the U.S. this year.