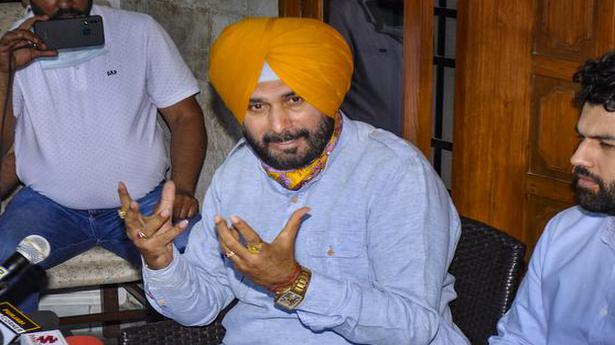 ‘The administration is more responsive to the Badals than Congress lawmakers, workers’

Former Punjab Minister and Congress leader, Navjot Singh Sidhu, on Sunday raised the banner of revolt by tweeting that the State government was promoting ‘Mafia Raj’ and the administration was more responsive to the Badals of the Shiromani Akali Dal than Congress lawmakers and workers.

The timing of Mr. Sidhu’s comments is crucial as it comes just a day ahead of the Congress Working Committee (CWC) meet to analyse party’s poor performance in the recently concluded Assembly elections, especially losing Kerala and Assam, where the party was hoping to do well and drawing a blank in Bengal.

At a time, when the Congress is grappling with poor performance, Mr. Sidhu’s outburst would only add to the party’s problems in Punjab that is headed for Assembly polls next year.

“Consensus among MLAs, Badal Sarkar is ruling in lieu of Congress Govt … Bureaucracy and Police act as per wishes of Badal Family, more often than listening to our MLAs and Party workers. Govt run not for welfare of the People, but for continuing control of Mafia Raj # 75-25,” Mr. Sidhu tweeted.

For several days now, Mr. Sidhu has been vocal against his own government over the delay in probe into the 2015 Kotkapura firing incident following the desecration of the Guru Granth Sahib in Punjab’s Faridkot.

Last year, the protests against the new farm laws had brought all the Congress factions together but once again, Mr. Sidhu has been defiant against his party and the government. In 2019 too, Mr. Sidhu had resigned from the State Cabinet after his growing differences and public spats with the Chief Minister.