Rangasamy to be sworn in as Puducherry CM on May 7 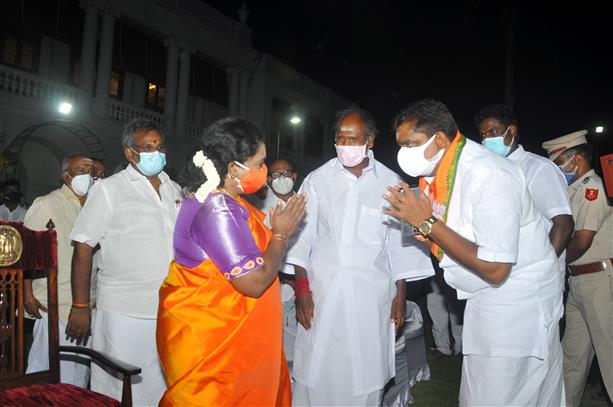 AINRC chief N Rangasamy will be sworn in as chief minister of Union Territory of Puducherry at a brief ceremony here on Friday.

Lt Governor Tamilisai Soundararajan would induct Rangasamy as chief minister at a brief session on the precincts of Rajnivas here.

Official sources said Rangasamy alone would be inducted as chief minister tomorrow although he would be heading an NDA dispensation which has the BJP as the other constituent.

According to party sources, the swearing in of other ministers, including those from BJP will take place in the next few days.

Usually, the strength of a ministry in Puducherry would be six, including the chief minister.

There is however a reported move to have one deputy chief minister now although there is no precedent in this regard.

A Namassivayam, who joined the BJP in January after quitting the Congress is tipped for the post of deputy chief minister.

The concurrence of the Centre is awaited for the appointment of deputy chief minister, BJP sources said.

The total strength of the Assembly is 30 and sixteen is the magic number for formation of a government.

The AINRC and BJP have a combined strength of 16.

There are six independents elected to the House and they are by and large supporters of Rangasamy.

The DMK has emerged victorious from six segments out of 13 seats it contested.

The Congress fared poorly by annexing only two out of the 14 seats it contested. PTI