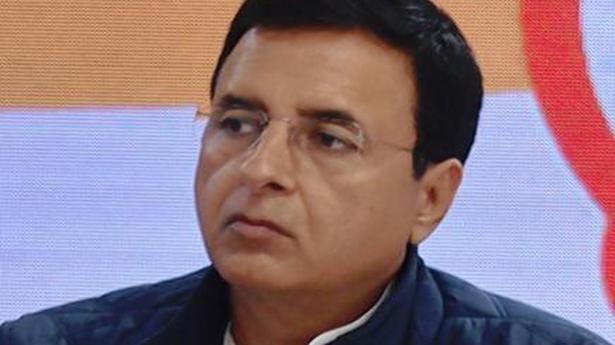 Randeep Surjewala accused the BJP-led govt. of reversing all economic gains made by the UPA govt., insensitive treatment of the farmers, inept handling of the COVID-19 pandemic among other things

The Congress on Sunday released a seven-point ‘chargesheet’ against Prime Minister Narendra Modi’s government which has now completed seven years in power. The party accused the ruling Bharatiya Janata Party (BJP) of reversing all economic gains made by the Congress led United Progressive Alliance (UPA) government, insensitive treatment of the farmers, inept handling of the COVID-19 pandemic and failing to protect the country against threats from China.

Randeep Surjewala, Congress general secretary and in-charge of communication department, in a virtual press conference said the Modi government was the weakest government India had had in 73 years.

The government came to power on the promise of providing two crore employment. “In seven years they should have provided 14 crore jobs. Forget about 14 crore jobs, the unemployment rate is on a 45-year high,” he added.

Skyhigh inflation was exacerbating the already volatile situation. “Petrol is selling at ₹100 per litre while mustard oil at ₹200 per litre. The LPG cylinders are at ₹809 per. The rate of pulses is also skyrocketing,” he added.

The Congress leader also slammed the government for its insensitive attitude towards the farmers. He said that the BJP government wanted big corporations to replace the small farmers. He also accused the government of going back on their promise of implementation of the Swaminathan Commission report.

‘Govt is against poor’

“This government is not against poverty, they are against the poor,” he said pointing at the World Bank report that claimed that during the UPA years 27 crore persons overcame extreme poverty while the PEW Research Centre in 2020 said middle class had shrunk in India with nearly 3.20 crore people being pushed off the grid.

Mr. Surjewala reiterated the Congress’s earlier allegation that the government had been under-reporting the COVID-19 deaths. “Will the Modi government explain why there is a paucity of vaccines? And if there were no vaccines for us then why were 6.63 crore vaccines sent to the other countries,” he said.

Despite the “chest-thumping” by the Modi government, Mr. Surjewala said, China continued to “occupy the Indian territory with impunity in Ladakh and Arunachal Pradesh”.

PM Narendra Modi said both sides will continue to build on the shared understanding to expand cooperation in multiple areas, including in hydropower, development...
Read more
World

A senior NATO official says Russia’s military advance in Ukraine appears to be faltering and has expressed hope that Kyiv can win the war A...
Read more
Entertainment

Back in the 90s, when Hindi serials were a far cry from what they are now, Neena Gupta and Kanwaljit Singh starred in the...
Read more
- Advertisement -

PM Narendra Modi said both sides will continue to build on the shared understanding to expand cooperation in multiple areas, including in hydropower, development...
Read more

The government college teachers’ associations are urging the Higher Education Department to act on their long-pending representations. On Thursday, the Government College Teachers’ Manram...
Read more