Talks ‘intensify’ on bringing U.S. back to Iran nuclear deal

Wholesale inflation at record high of 15.08%

Karnataka Govt has taken away our powers, EC tells HC 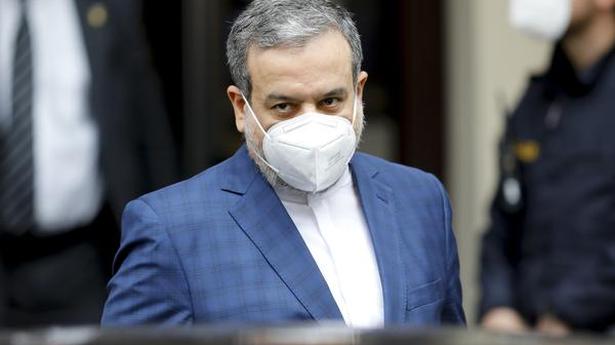 World powers held a fourth round of high-level talks on Friday aimed at bringing the U.S. back into the nuclear deal with Iran, with both sides signalling a willingness to work out the major stumbling blocks.

The talks began in Austria in early April. Russian delegate Mikhail Ulyanov tweeted following Friday’s meeting that “the participants agreed on the need to intensify the process.”

“The delegations seem to be ready to stay in Vienna as long as necessary to achieve the goal,” he wrote.

The U.S. pulled out of the landmark 2015 deal in 2018 after then-President Donald Trump said the pact needed to be renegotiated. The deal had promised Iran economic incentives in exchange for curbs on its nuclear programme, and the Trump administration reimposed heavy sanctions on the Islamic republic in an unsuccessful attempt to bring Tehran into new talks.

Iran reacted by steadily increasing its violations of the deal by enriching uranium to a greater purity than permitted.

U.S. President Joe Biden says he wants to rejoin the deal, known as the Joint Comprehensive Plan of Action, or JCPOA, but that Iran needs to return to compliance.

The pact is meant to prevent Iran from obtaining a nuclear bomb, something the country insists it is not inclined to. Iran insists all sanctions must be lifted before it reverses violations.

Delegates to the Vienna talks concede, for example, that Iranian nuclear scientists cannot unlearn the knowledge they acquired in the last three years, but it is not clear whether Iran’s new centrifuges would need to be destroyed, mothballed and locked away, or simply taken offline.

Because the U.S. is currently out of the deal, there were no American representatives at the talks.

Iran’s Deputy Foreign Minister Abbas Araghchi, said after the meeting that his impression was that all sides were committed to finding a solution.

Abhay Deol says he’s ‘getting married’, but neglects to reveal to whom

Abhay Deol has said that he is going to tie the knot. Take this news with a pinch of...
Read more
Business

Amid market volatility, is this the time to rebalance your portfolio?

Amid market volatility and repo rate hikes, it is seen as the right time for investors to...
Read more
National

Deepika Padukone stuns in a black-and-gold saree on the Cannes red...

After turning out in a gorgeous look during a media interaction, Deepika Padukone turned heads on the red carpet of the ongoing Cannes Film...
Read more
- Advertisement -