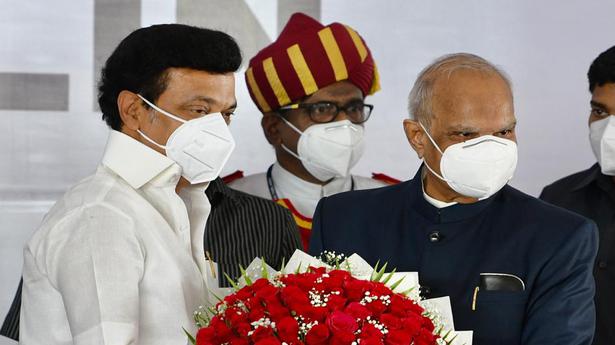 Tamil Nadu Governor Banwarilal Purohit on Wednesday appointed DMK president M.K. Stalin as the Chief Minister and invited him to form the government in the State on May 7. The swearing-in ceremony of the Cabinet of Ministers is underway.

Here are the live updates:

Cabinet to have 34 Ministers

The DMK government under Chief Minister M.K. Stalin will have 34 Ministers. While veteran leader Duraimurugan is designated number two in the Cabinet with Water Resources portfolio, former Chennai Mayor Ma. Subramaniam is the new Minister for Medical and Family Welfare and will handle Health Department in the midst of the COVID-19 pandemic.

Following a communication from Mr. Stalin, who sent a list of persons to be appointed as Ministers, Governor Banwarilal Purohit approved the recommendations.

Full list of Tamil Nadu Cabinet and Council of Ministers

DMK president was sworn-in as the Chief Minister of Tamil Nadu on May 7, 2021.

M.K. Stalin being sworn in as Chief Minister of Tamil Nadu by Governor Banwarilal Purohit.

DMK president M.K. Stalin handing over a letter of his election as Legislature Party Leader to Governor Banwarilal Purohit on May 5, 2021. Photo: Special Arrangement

“The Governor of Tamil Nadu appointed him [Mr. Stalin] as the Chief Minister of Tamil Nadu and invited him to form the Ministry and to have swearing-in ceremony on May 7 2021 at 9 am at Raj Bhavan, Chennai,” an official communication from the Raj Bhavan on Wednesday evening stated.

Earlier on Wednesday, Governor’s Secretary Anandrao Vishnu Patil visited Mr. Stalin’s residence and handed over the official communication in this regard, party sources said. Official sources said that Mr. Stalin would be sworn in as the Chief Minister in a simple ceremony.

Public watched the live telecast of the swearing-in ceremony of Chief Minister M.K. Stalin on televisions and mobile phones in Coimbatore on May 7, 2021.

DMK president called upon partymen to watch the ceremony on television channels from their homes, as the pandemic caused by COVID-19 has prevented his organising a public event.

In a statement in Chennai on Thursday, Mr. Stalin said he had planned a public event in the presence of party cadres, whose relentless work had ensured victory for the party. “But the pandemic has emerged as a second wave and a public function is not possible. Your health is my priority. Watch it from your home. You will be with me in Chennai mentally,” he added.

Mr. Stalin said May 7 was a golden letter day in the political history of Tamil Nadu as the DMK would assume power for the sixth time. “I take pride in the fact that I am going to occupy the seat once occupied by Anna [C N Annadurai] and Kalaignar [M Karunanidhi] through sheer hard work,” he said.