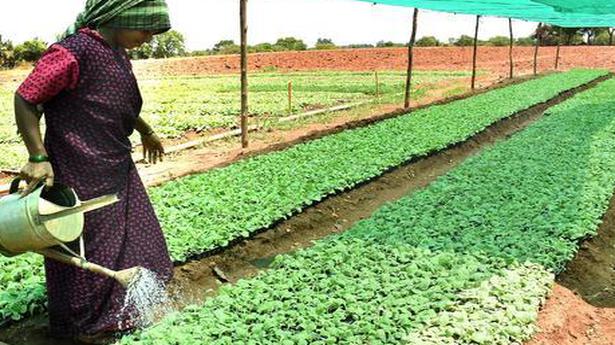 Farmers engaging in plantation across Mysuru and parts of Hassan district after Tobacco Board enhanced crop size to 97 million kg.

The COVID-19 pandemic appears to have made little impact on tobacco cultivation in Karnataka this year with farmers engaging in plantation across Mysuru and parts of neighbouring Hassan district after the Tobacco Board enhanced the crop size to 97 million kg.

The Board, which had reduced the crop size for Karnataka from 99 million kg to 88 million kg last year, fearing a dip in the global demand for the commodity due to the pandemic, has almost restored the regular crop size by increasing it to 97 million kg for the ensuing year.

A total of 88.42 million kg of tobacco was auctioned across the 11 platforms in the State last year (2020-21) with the highest bid fetching going for ₹264 per kg though the average price for the year stood at ₹119.87 per kg as a substantial volume of tobacco was categorised as low-grade.

Notwithstanding the uncertainty over exports during the pandemic, the farmers prefer to go for tobacco crop, where the returns are more assured than other crops, said President of Federation of Virginia Flue Cured (VFC) Tobacco Growers Associations of Karnataka Javare Gowda. Also, the Indian Tobacco Association (ITA), comprising manufacturers and traders of tobacco, had placed an indent for purchase of 99 million kg this year.

Mr. Gowda cited the example of how tobacco farmers, who shifted to ginger last year, burnt their hands after the price of the tuber collapsed from ₹2,500 to less than ₹1,000 for a 60 kg bag. “The price of ginger has still not recovered,” said Mr. Gowda.

Also, the Tobacco Board’s decision to enhance the crop size allows each tobacco farmer to grow around 1,750 kg per barn while the same was restricted to 1,550 kg last year. The farmers argue that they incur more or less the same expenditure when they grow about 150 to 200 kg more for every barn. However, the increase in prices of fertilizers is expected to impact their bottomline.

Meanwhile, Joint Director of Agriculture, Mysuru, Mahantheshappa, said the farmers may also increase the yield of tobacco by adopting advanced farming techniques without necessarily enlarging the area of cultivation in view of the enhancement in crop size.

However, Mr. Mahantheshappa said the fall in price of ginger need not necessarily push all the farmers to return to tobacco. A good percentage is also expected to opt for maize, which is expected to yield a good crop and a reasonably remunerative price in view of the growing demand from the poultry industry.