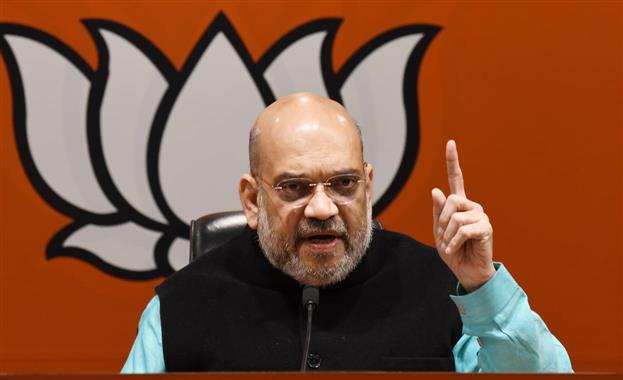 “There is no time to hold talks, will only retaliate,” he said. Amid the Opposition’s criticism that the BJP-led Centre had “failed to provide security to the people of Jammu and Kashmir,” Shah said earlier (before 2014 when Prime Minister Narendra Modi took over) whenever such incidents happened, there used to be a “polite request from the Delhi Durbar”.

“All this changed after there was an attack and our jawans were killed. For the first time (in 2016), India conducted a surgical strike and told the world that India would not tolerate such attacks… that no one could disrupt India’s borders,” Shah said, terming the surgical strike under PM Modi and late Manohar Parrikar, the then Defence Minister, an “important message to the world”.

“For many years, there were transgressions at our borders, terrorists used to enter and carry out terrorist activities. For the first time under the leadership of PM Modi and Manohar Parrikar, India established its position. There was a time when talks happened, now it is the time to retaliate,” Shah said.

Pakistan, meanwhile, has termed Amit Shah’s observations as irresponsible and provocative. “Such statements serve as smokescreens to divert world attention from J&K and treatment of Muslims and other minorities in India,’’ said the Pakistan Foreign Office.

Its statement said Pakistan’s swift response to India’s Balakot “misadventure” in 2019 “fully demonstrated the will and preparedness of our armed forces”.

Jammu: A junior commissioned officer (JCO) and another soldier were critically injured on Thursday in an encounter with terrorists in Poonch district. Defence Ministry spokesman Lt Col Devender Anand said: “In an ongoing counter-terrorist operation in Nar Khas Forest, Mendhar, there was exchange of fire between troops and terrorists during which one JCO and one soldier were critically injured. The operations are under progress”. IANS

The Congress hit out at Shah over the surgical strike remark, saying he must first reclaim Indian land from China. “Let him give a deadline for reclaiming 900 sq km of Indian territory from China,” said Randeep Surjewala.