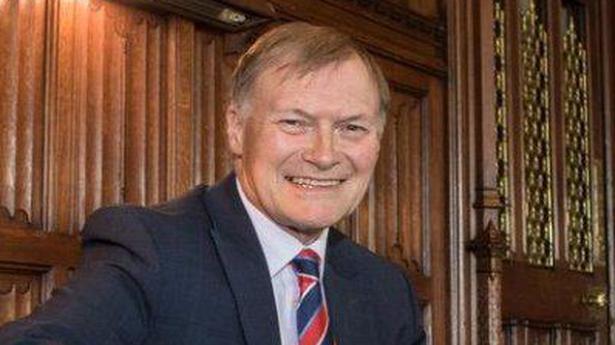 David Amess has been a member of Parliament since 1997.

British Conservative lawmaker David Amess has died after being stabbed Friday during a meeting with constituents at a church in eastern England. A 25-year-old man has been arrested.

The Essex Police force said officers were called to reports of a stabbing in Leigh-on-Sea just after noon Friday. It said “a man was arrested and a knife recovered”.

“We are not looking for anyone else in connection with the incident and do not believe there is an ongoing threat to the wider public,” police said.

The force said later that a man injured in the stabbing had died. It did not release his name. The suspect is being being held on suspicion of murder, police said.

Sky News and others said Amess was attacked during a regular meeting with constituents at Belfairs Methodist Church in a residential area of Leigh-on-Sea, a seaside town east of London.

Aerial footage showed several ambulances and an air ambulance was waiting nearby to the church.

John Lamb, a local councilor, said Amess had not been taken to hospital more than two hours after the attack and the situation was “extremely serious.”

Politicians from across the political spectrum expressed shock at initial reports of the stabbing. Labour Party leader Keir Starmer tweeted that it was “Horrific and deeply shocking news. Thinking of David, his family and his staff.”

Former Prime Minister David Cameron, a Conservative, tweeted: “Very alarming and worrying news reports coming from Leigh-on-Sea. My thoughts and prayers are with Sir David Amess and his family.”

Violence against British politicians is rare, but in June 2016 Labour Party lawmaker Jo Cox was fatally stabbed and shot in her northern England constituency. A far-right extremist was convicted of her murder.

Cox’s widower, Brendan Cox, tweeted that “Attacking our elected representatives is an attack on democracy itself. There is no excuse, no justification. It is as cowardly as it gets.”

British lawmakers are protected by armed police when they are inside Parliament, but have no such protection in their constituencies. Amess published the times and locations of his open meetings with constituents on his website.

Two other British lawmakers have been attacked this century during their “surgeries,” regular meetings where constituents can present concerns and complaints.

Labour legislator Stephen Timms was stabbed in the stomach and injured in May 2010 by a female student radicalized by online sermons from an al-Qaeda-linked preacher.

In 2000, Liberal Democrat lawmaker Nigel Jones and his aide Andrew Pennington were attacked by a man wielding a sword during such a meeting. Pennington was killed and Jones injured in the attack in Cheltenham, England.

Ahead of the beginning of the new academic year, the Motor Vehicle Department (MVD) on Tuesday issued guidelines for...
Read more
National

Man believed to be from Madurai rescued from Uttarakhand

A man believed to be a native of Madurai has been rescued in Bageswar district of Uttarakhand and efforts are on to locate his...
Read more
National

Hyderabad Metro Rail ridership has risen to about 3 lakh passengers a day across the three traffic corridors, but it is still one lakh away...
Read more
National

Bhaskara Rao Commission report yet to see the light of day

Motorists in several parts of the city had to go through inundated roads following torrential rain on Tuesday. The rainfall, which started by evening,...
Read more
- Advertisement -

A Motion of Displeasure tabled by the Opposition Tamil National Alliance (TNA) MP MA Sumanthiran to censure President Rajapaksa was defeated 119-68 in a...
Read more