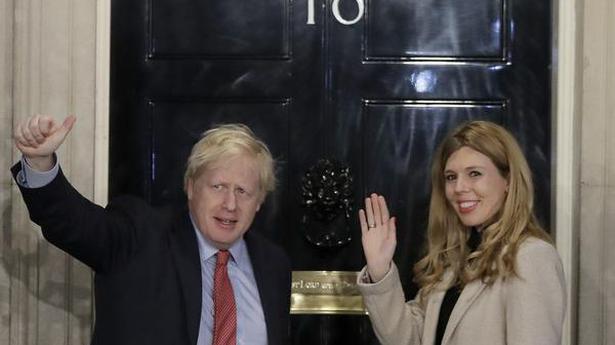 Earlier this month, it was reported that wedding invitations had been sent to friends and family for July 2022.

Mr. Johnson’s office declined to comment on reports in the Mail on Sunday and the Sun that the couple wed at the Roman Catholic Westminster Cathedral in front of a small group of friends and family.

The Sun said senior staff in Mr. Johnson’s 10 Downing St office were unaware of the wedding plan. Both newspapers said guests were invited at the last minute to the central London ceremony.

Under current coronavirus restrictions in England, weddings can be attended by a maximum of 30 people.

Mr. Johnson, 56, and 33-year-old Ms. Symonds, an environmental campaigner, announced their engagement in February 2020 and have a son together, 1-year-old Wilfred.

Earlier this month the Sun had reported that wedding invitations had been sent to friends and family for July 2022.

The marriage would be Ms. Symonds’ first and Johnson’s third. He has at least five other children from previous relationships.

The last British Prime Minister to marry in office was Lord Liverpool in 1822.

Politicians sent congratulations after the news was reported.

The reported nuptials come after a tumultuous political week for Mr. Johnson, who was accused by former top aide Dominic Cummings on Wednesday of bungling the government’s response to the coronavirus and being “unfit for the job.”

On Friday, an ethics inquiry found the Prime Minister acted “unwisely” in renovating his Downing Street apartment without knowing where the money had come from, though it cleared him of misconduct.

Pro tem chairman to be appointed after Horatti’s resignation

Prince Narula: ‘After all that Munawar Faruqui has gone through, he...

Reality show star Prince Narula is happy about Munawar Faruqui winning Lock Upp. Having been a part of the show as a ‘trouble maker’...
Read more
National

BJP submits memorandum to Governor on law and order in Andhra...

The markets regulator has mandated a minimum of 20 investors and a subscription amount of at least ₹20 crore for each Collective Investment Scheme The...
Read more
- Advertisement -

European Union authorities say the bloc will no longer require masks to be worn at airports and on planes starting next week amid the...
Read more