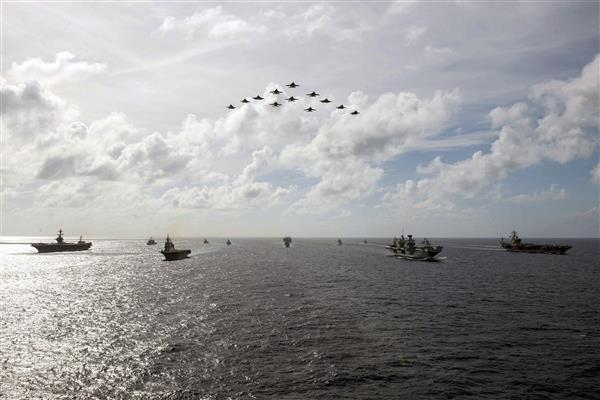 The UK’s Carrier Strike Group led by its largest warship HMS Queen Elizabeth sailed into the Bay of Bengal on Friday for the second such voyage in the last three months, in a powerful demonstration of the growing strategic partnership between the two countries.

The British High Commission in India said the Carrier Strike Group (CSG) will take part in the “most demanding exercise” ever between the UK and India, incorporating elements from all three military services.

HMS Queen Elizabeth and its strike task group had carried out a mega wargame with a number of Indian warships and submarines in the Bay of Bengal in July that featured a range of complex drills.

“The deployment is a powerful demonstration of the UK’s commitment to deepening its diplomatic, economic and security-based ties in the Indo-Pacific region. India is essential in ensuring a free, open, inclusive and prosperous Indo-Pacific,” the High Commission said in a statement.

A carrier battle group or carrier strike group is a mega naval fleet comprising an aircraft carrier, accompanied by a large number of destroyers, frigates and other ships.

British High Commissioner to India Alex Ellis said India is an “essential” partner for the UK in the Indo-Pacific region and that the Carrier Strike Group’s visit demonstrates the deepening of the bilateral defence and security partnership.

The envoy also referred to the resolve by Prime Minister Narendra Modi and British Prime Minister Boris Johnson to work towards shared security and prosperity.

“This visit will boost the cooperation of our armed forces and show the living bridge connecting our people,” he said.

“Both the Indian and the Royal Navy are blue-water, multi-carrier navies, which places us in a very exclusive club,” he said.

“Our growing interactions are a testimony to the shared commitment to the rules-based international system, a belief in the values of open trade, and in the importance of the freedom of the high seas – a right conveyed on all nations,” he added.

HNLMS Evertsen, a Provinciën-class frigate of the Royal Netherlands Navy, is also visiting Mumbai along with the British CSG.

Ambassador of the Netherlands to India Marten van den Berg said the Indian Ocean is a gateway for Europe into the Indo-Pacific and his country definitely recognises India’s crucial role in the region.

“The visit to the port of Mumbai by HNLMS Evertsen is a confirmation of our long-standing strong relationship and a step towards enhancement of the Netherlands and India defence relations,” the envoy said. PTI