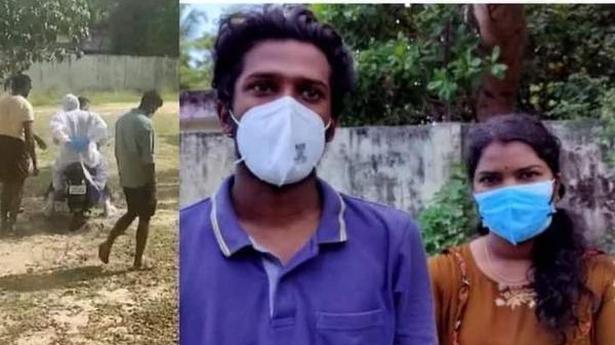 They shifted him to hospital on bike when he experienced uneasiness, breathlessness

Two COVID-19 volunteers have been lauded for saving the life of a COVID-19 patient at Punnapra here on Friday.

Earlier, a video of the seriously ill patient seated between two PPE- kit clad persons being shifted to a hospital from a domiciliary care centre on a motorcycle went viral on social media.

The patient, identified as a 37-year-old man from Ambalappuzha, reached the domiciliary care centre at the College of Engineering and Management, Punnapra, run by the Punnapra North grama panchayat the other day due to lack of facilities at his home to quarantine himself.

On Friday morning, he started to experience uneasiness and breathlessness. After being informed of his deteriorating health condition by other patients, the two COVID-19 volunteers, identified as Ashwin Kunjumon and Rekha, who came there to serve breakfast immediately attended to him. The duo with the help of another person brought the patient from the third floor to the ground floor of the building. They later took him to the Sagara Co-operative Hospital, Punnapra, which is less than 100 metres away on the motorbike.

The volunteers who are associated with the Democratic Youth Federation of India later said that after seeing the condition of the patient, who was showing signs of cardiac arrest, they did not wait for the arrival of the ambulance and took him to the nearby hospital.

“He started to experience breathlessness around 9 a.m. As there were no ambulance or other emergency medical facilities available at the centre, the volunteers took him to the hospital on the motorbike of another COVID-19 patient,” said Vishnu P., a COVID-19 patient at the domiciliary care centre who witnessed the incident.

DMO L. Anithakumari said a probe had been launched and the preliminary findings were shared with the District Collector.

“The domiciliary care centre at the Punnapra Engineering College is run by the grama panchayat. Neither the panchayat call centre nor COVID-19 helpline numbers in the district received any call from the centre for help. As the patient’s condition worsened, those at the centre panicked and volunteers appointed by the grama panchayat immediately took him to the hospital without wasting time. As only asymptomatic or patients with mild symptoms are lodged in domiciliary care centres, no doctors or medical facilities are available in these centres,” Ms. Anithakumari said.